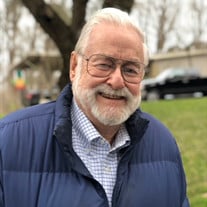 At age 92, Wilson Ferrell passed away March 30, 2022. He is preceded in death by his wife, Hollis Ann Norris Ferrell; brother, Marshall Carr Ferrell, Jr.; and sister, Elizabeth Ferrell Failing. He was born December 16, 1929 in Winston-Salem, NC to the late Marshall and Anne Maclin Ferrell. He spent his mischievous childhood in Petersburg, VA, and he graduated the University of Virginia where he was a brother of the Sigma Chi Fraternity and a member of the UVA Swim Team. Upon graduation, he attended Officer Candidate School was commissioned as a 2nd Lieutenant in the United States Army, serving with the 101st Airborne and the Corp of Engineers during the Korean War. He continued his service with the Army Reserve Quarter Masters' Corp at Ft Lee and retired his commission as a Captain. Wilson had a passion for anything mechanical, and in 1956 he founded Dominion Chemical Company, Petersburg, VA. He was most happy facing any business challenge especially all things boilers. He was a proud and civic-minded community member of many boards, clubs, and associations in and around Petersburg. As a lifelong Episcopalian, he joined Christ and Grace Church in 1938 and continued his membership with St. Paul's Church. He was a loving husband, father, grandfather and friend. He was known for his steady hand and kind demeanor. Wilson is survived by his son, W. Maclin Ferrell, Jr. and wife, Susan Hyatt Ferrell, of Chesterfield, VA; daughter, Molly Maclin Lee and husband, Hank G. Lee, of Richmond, VA; stepdaughter, Amy Christine Norris of Petersburg, VA; stepson, Scott Norris and wife, Emily Norris, of Tucson, AZ; 7 grandchildren; 5 great-grandchildren; former wife, Sue Epperson Ferrell; and a large extended family and many, many friends. There will be a visitation at the Petersburg Chapel of J.T. Morriss & Son Funeral Home on Wednesday, April 6, 2022 at 6:00 pm - 7:30 pm. A memorial service will be held Thursday, April 7, 2022 at 1:00 pm at St Paul's Episcopal Church, Petersburg, VA. In lieu of flowers, please consider a donation to Sigma Chi fraternity, in particular his grandson's colony chapter at VCU, or the charity of your choice. Condolences may be registered at www.jtmorriss.com.

The family of Wilson Ferrell created this Life Tributes page to make it easy to share your memories.

Send flowers to the Ferrell family.