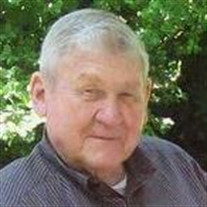 William Early “Shaky” Jacobs, 92, went to be with his Lord on September 18, 2021 at his home while watching his favorite football team, the Hokies, with his wife nearby. As he always wished, Shaky went to sleep and didn’t awake. Born, raised, and committed to Hopewell, he loved his city and remained a resident throughout his nearly 93 years. Married to Shirley Smith Jacobs in 1958, they celebrated their 63rd anniversary in May of this year. Shaky graduated from Hopewell High School in 1947 and the Virginia Instrumentation Apprenticeship in 1977. From 1951 to 1953, he served in the U.S. Army, 430 Engineer Construction Battalion, during the Korean Conflict. He retired from Allied Chemical following a 44-year career in the Research Lab and Instrumentation Department. Shaky was a member of Woodlawn Presbyterian Church and a member of the Veterans of Foreign Wars, Post 637. Shaky loved all sports and played many, most notably during his years as a left-handed pitcher on the VFW fastpitch softball team. He touched the lives of many young people, serving as a coach and referee in recreation league sports. He also loved the Outer Banks, where he spent many happy times with family and friends fishing and flounder gigging. Shaky is pre-deceased by his mother and father, Ottie Earl and Gertrude Wines Jacobs and sisters, Helen Jacobs Erdman and Kathryn Jacobs Giles. In addition to his wife, Shirley, he is survived by his daughters, Tracey Jacobs Partin (Wesley) of Carrollton, Virginia, and Elisa Jacobs (Gary) Norris of Midlothian, Virginia. Additionally, he had four granddaughters, Alexandria Smallwood, Augusta Feldman (Samantha), Audra Marcolini (Brian), and Berkeleigh Smallwood; two great-granddaughters, Avery June and Kathryn Lindsay; his brother, Calvin Jacobs (Joan) of Chester, Virginia; and numerous nieces and nephews. The funeral will be held at 3:00 p.m. on Wednesday, September 22, 2021, at Woodlawn Presbyterian Church, 1201 Blackstone Avenue, and Pastor Jeff Butler will officiate. The family will receive guests one-hour prior. In light of the resurgence of COVID-19, the service will be broadcast via the church’s Facebook page. Attendees are asked to please wear masks if attending in person. The family requests that donations be made to Woodlawn Presbyterian Church in lieu of flowers. Condolences may be registered www.jtmorriss.com.

The family of William Early "Shaky" Jacobs created this Life Tributes page to make it easy to share your memories.

Send flowers to the Jacobs family.