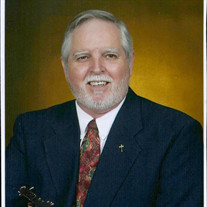 Walter Jay Stewart, 76, died October 21, 2021. Born and raised in Hopewell, Virginia, he was the son of the late Josh Stewart, Jr. and Janie Louise Sharp Stewart. He was a loving husband, father and grandfather. Jay loved his church and church family, First Christian Church on 11th Avenue in Hopewell, where he was a deacon and served on the church board. He served for a time as the youth director and was the president of his Sunday School class. Jay also served on the Hopewell Clean City Commission. Jay loved all sports. When he golfed, he got a 'hole-in-one;’ when he played on the church ball team, they won the championship; when he played basketball, they won the championship; and when he coached the boys church basketball, they won the championship. Jay mentored quite a few youth in the church and through friends. He was a great ping pong player but most of all he loved sitting in a john boat with Donna on a pond fishing. He was a silent worker, very humble and quiet. He worked in the background not wanting any notoriety or recognition. In addition to his parents, Mr. Stewart was preceded in death by a brother, Thomas Stewart, and a sister, Ann Stewart Buyalos. He is survived by his wife of 56 years, Donna Keener Stewart; daughters, Natalie Shay Stewart (Heather Almarode) of Chester, Gina Rene Stewart of Hopewell; grandchildren, Corey Jay (CJ) Hedrick (Kelsey) of Hopewell, Caleb Keener Hedrick (Faith) of Prince George, Evan Gaillard of Chester, Bristol Oliver of Hopewell, Janie Christian Stewart of Hopewell and Jase Cameron Stewart-Kreynus of Hopewell; one great-granddaughter, Elliana Keener Hedrick of Prince George; and a sister, Sarah Stewart Allen (Cary) of Chester. A visitation will be on Saturday, October 30th at 10:00 am at First Christian Church, 203 N. 11th Avenue, Hopewell with the memorial service to follow at 11:00 am with the Rev. Joyce Harville presiding. Memorial donations may be made to First Christian Church. The family is being served by the Hopewell Chapel of J.T. Morriss & Son Funeral Home. Condolences can be registered at www.jtmorriss.com.

Walter Jay Stewart, 76, died October 21, 2021. Born and raised in Hopewell, Virginia, he was the son of the late Josh Stewart, Jr. and Janie Louise Sharp Stewart. He was a loving husband, father and grandfather. Jay loved his church and church... View Obituary & Service Information

The family of Walter Jay Stewart created this Life Tributes page to make it easy to share your memories.

Send flowers to the Stewart family.