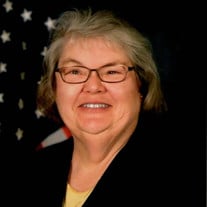 Veera Vee Lewis Roddy passed away peacefully November 29, 2021 after a short, courageous battle with cancer. She was born on February 10, 1956, at Darnall Army Hospital in Fort Hood, Texas, to Sgt. Athanie A. Lewis and Elfriede Muller Lewis. As a child, she lived with her sister and her parents in both Germany and Killeen, Texas. She graduated from Killeen High School in 1974 and attended Central Texas College (now American Technological University), earning an associate degree in Secretarial Science. She began working as an administrative assistant in Killeen, and soon after met the love of her life, Alan Roddy, while he was serving in the U.S. Army at Fort Hood, Texas. After they married on June 4, 1977, they lived their life as a military couple in Fort Hood, Texas, in Lucius Clay Kaserne, Germany, in Fort Gillam, Georgia, in Fort Lewis, Washington, and Fort Bragg, North Carolina, until Alan retired, and they settled in Chester, Virginia. Their only child, daughter, Leslie Ann, was born June 9, 1981 in Bremerhaven, Germany and was the apple of her mother’s eye. For 33 years, Veera had a distinguished career in civil service, last working for the Defense Supply Center of Richmond in the state of Virginia as a FOIA Officer until her retirement in 2014. Veera enjoyed spending time with her daughter and two granddaughters baking, sewing, crafting, and tending to her African violets. She never missed a concert or major school event for her daughter or her granddaughters. She also loved to return to Texas to visit family and her beloved bluebonnets, and to cruise and attend Jim Brickman concerts with her beloved husband. After having a fear of water throughout her childhood, she learned to swim as an adult and enjoyed swimming laps and visiting with friends at the gym. Veera touched others with her devotion to family, loyalty, honesty, common sense, dry sense of humor, and incredible work ethic. She will be deeply missed by her loving husband of 44 years, Alan Roddy; her devoted daughter, Leslie Ann Goodwin; her adoring granddaughters, Emma Lynn Goodwin, age 14, and Savanah Grace Goodwin age 12; her older sister, Velesa and husband, Pat Sullivan; her younger brothers, Vince Lewis and Richard Gregory; sister-in-law, Brenda and husband, John Ellis; brother-in-law, Ron and wife, Theo Roddy; and nieces, Erin Haynes, Kathleen Pendleton, and Ann Ellis; and uncles, aunts and cousins in central Germany and California. She was preceded in death by her father, Retired 1st Sgt. Athanie Lewis; her mother, Elfriede Lewis; her father-in-law, Grady D. Roddy; and her mother-in-law, Dovie I. Roddy. Family and friends are invited to attend a Celebration of Life Service for Veera on December 19th, 2021 at 3:00 p.m. at J.T. Morriss & Son Funeral Home, 3050 W. Hundred Road, Chester, Virginia. Interment will take place at the Dallas Fort Worth National Cemetery at a later date. In lieu of flowers, the family requests donations be made to the American Pancreatic Cancer Action Network. Condolences may be registered at www.jtmorriss.com.

The family of Veera Vee Roddy created this Life Tributes page to make it easy to share your memories.

Send flowers to the Roddy family.