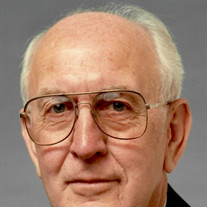 Thomas R. Blount "Tom," 96, of Hopewell, Virginia, passed away on April 8, 2022. He was preceded in death by his wife of 63 years, Josephine and his son, Doug. Tom was a graduate of Hopewell High School and served his country proudly in the United States Army in World War II. He was stationed in Hawaii and Iwo Jima and spent time serving in the Pacific theater. Tom retired from Hercules, where he worked as an administrator. He was also an active member of West End Presbyterian Church, serving as a teacher, Elder, and Sunday School Superintendent. Additionally, Tom was a member of the VFW Post #637 and American Legion Post #146. Tom also took part in many community functions, serving on the local Selective Service Board, the Central Virginia Health Services, as a Community Representative on its Board of Directors, the Hopewell City Council, as Mayor, and Councilor, the John Randolph Hospital Authority as Chairman, and the John Randolph Foundation as a Board Member and Chairman. Most of all, Tom was a devoted son, husband, father and grandfather, and he will be greatly missed. Tom is survived by his sons, Rob (Deb) and Tim (Judy); daughter-in-law, Nancy (Doug); granddaughters, Meredith (Andrew) and Paige; grandson, Josh; and great-grandsons, Lucas and Levi; numerous nieces, nephews, and other extended family and friends. The family will receive friends from 6 pm to 8 pm on Monday, April 18, 2022 at West End Presbyterian Church. A funeral service will be held at 11 am on Tuesday, April 19, 2022 at the church with interment to follow in Appomattox Cemetery. In lieu of flowers, donations may be made to the charity of your choice in his honor. The family is being served by the Hopewell Chapel of J.T. Morriss & Son Funeral Home. Online contributions may be conveyed to the family at www.jtmorriss.com.

Thomas R. Blount "Tom," 96, of Hopewell, Virginia, passed away on April 8, 2022. He was preceded in death by his wife of 63 years, Josephine and his son, Doug. Tom was a graduate of Hopewell High School and served his country proudly in the... View Obituary & Service Information

The family of Tom Robertson Blount Sr. created this Life Tributes page to make it easy to share your memories.

Send flowers to the Blount family.