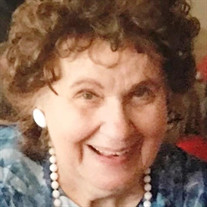 Martone, Tenia I. “Tenia Stathis”, 92, of Ashtabula, Ohio died peacefully on Saturday, February 13, 2021 at her home with her daughter in Prince George, Virginia. Born in Ashtabula, Ohio on July 17, 1928, she was the daughter of the late John and Irene Stathis, and was also preceded in death by her sister, Addie Tetreault; three brothers, Clifford and Clyde Fuller, George Stathis; and daughter-in-law, Diana McEndree. Tenia graduated from Harbor High School in 1946 as member of the band and majorettes. After 25 years of dedicated service, she retired from Ashtabula Rubber Company in the finishing department. She was an active member and volunteer at Mother of Sorrow Catholic School and Church, the American Legion, Catholic Charities, and VFW Auxiliary. She enjoyed reading in the sun, playing cards and games, bowling, dancing, and most of all spending time with family and friends on her porch swing. She also loved watching and attending Cleveland sports games with family, especially the Cleveland Indians! She will forever be remembered for her remarkable strength and love of her family. She is survived by her five children, LJ McEndree, Charles McEndree and wife, Kathy, Deborah McEndree, George McEndree and wife, Debbie, Bernard McEndree and wife, Janet; 12 grandchildren, John, Brian, Joleen, Bridget, Tammy, Robert, Karly, Justina, Ryan, Devon, Adam and Samuel; 14 great-grandchildren; five great-great-grandchildren; and her nieces, nephews and many friends. A memorial mass will be held at 2:00 p.m. on Saturday, February 20, 2021 in St. Joseph Catholic Church, 151 W Washington St, Petersburg, VA 23803. Her life will be celebrated in Ashtabula, Ohio with family and friends in the summer of 2021. In lieu of flowers, memorial contributions may be made to the Alzheimer's Association National Capital Area Chapter, 8180 Greensboro Drive, Suite 400. McLean, VA 22102. The family is being served by the Petersburg Chapel of J.T. Morriss and Son Funeral Homes and Crematory. Condolences may be registered at www.jtmorriss.com

The family of Tenia Irene Martone created this Life Tributes page to make it easy to share your memories.

Send flowers to the Martone family.