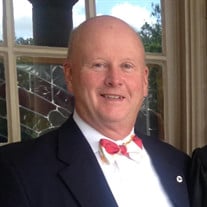 Ted Denney Lowder passed away peacefully and surrounded by his family at home on June 18, 2021. Known for his kindness, devotion to family and friends, and his gift of gab, Ted was a dependable and easy-going presence who relished being around others and lived a life full of laughter. There were few things he loved more than relaxing on the James River surrounded by family, friends, and his dogs. He cherished his relationship with his beloved wife Diane more than anything, creating a life full of wonderful memories together. He was known by many as “Bear,” particularly among his amazing group of childhood friends who found many opportunities to get together – including their annual fishing trip (that was more about the fellowship than the fishing!). He was predeceased by his parents, Richard and Betty Jane Lowder; is survived by his wife of 34 years, Diane Miller Lowder; and his devoted son, Perry Lowder. Other survivors include his brothers, Steve Lowder (Sandra) and Rick Lowder (Pam); and his brothers-in-law Bruce Miller (Ellen) and David Miller (Christina); and many nieces, nephews, cousins, and a wide circle of friends. Ted graduated from Hopewell High School, attended East Carolina University – where he was a member of Phi Kappa Tau fraternity – and graduated from Virginia Commonwealth University with a degree in Business. Following a career in IT, Ted pursued his dream of running a restaurant and bought the Hopewell Quick Lunch, where his connection to patrons earned him the title of Unofficial Mayor of Hopewell – all while making his award-winning chili dogs. A lifelong resident of Hopewell/Prince George, Ted was a loyal fan of the Hopewell Blue Devils, taking great pride in feeding the Hopewell football team their pre-game meals during their state championship season in 2003. A big sports fan, he was also loyal to his ECU Pirates, VCU Rams, UNC Tar Heels, and more recently the Randolph-Macon Yellow Jackets. Following the sale of the restaurant, he finished his career in sales, traveling around the state and learning the stories of anyone whose path crossed his own. In lieu of flowers, donations can be made to Hopewell High School Athletics in memory of Ted Lowder, 400 S Mesa Dr, Hopewell, VA 23860. A visitation will be held on Thursday June 24, 2021 from 5-7pm at the Hopewell Chapel of J.T. Morriss & Son Funeral Home. A memorial service will be held at 2pm on Friday June 25, 2021 at First Baptist Church 401 N. Second Avenue Hopewell, VA 23860, with a reception to follow at the Beacon Theatre, 401 N. Main Street, Hopewell. Condolences may be registered at www.jtmorriss.com.

Ted Denney Lowder passed away peacefully and surrounded by his family at home on June 18, 2021. Known for his kindness, devotion to family and friends, and his gift of gab, Ted was a dependable and easy-going presence who relished being around... View Obituary & Service Information

The family of Ted Denney Lowder created this Life Tributes page to make it easy to share your memories.

Ted Denney Lowder passed away peacefully and surrounded by his...

Send flowers to the Lowder family.