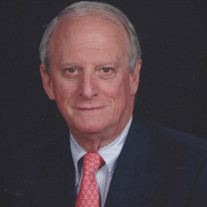 Samuel Pettaway Johnson III, 79, of Petersburg, VA, died March 3, 2022. Sam was a lifelong resident of Petersburg, VA. He was the son of the late Samuel Pettaway Johnson, Jr. and Mary Lee Powell Johnson. He is survived by his wife of almost 51 years, Elizabeth Barr Johnson; daughters, Sarah Barr Johnson Jones (Andrew) and Westbrook Johnson; grandchildren, Samuel Bratton Jones and Gambill Elizabeth Jones; a sister, Marypowell Johnson Prewitt (Richard) and many nieces and nephews. Sam graduated as Valedictorian from Petersburg High School, Class of 1960. He attended Randolph Macon College, where he was president of the student body and also his fraternity, Phi Kappa Sigma. He graduated Phi Beta Kappa from Randolph Macon College in 1964. He graduated from the University of Virginia School of Law in 1967. Upon graduation from Virginia, Sam entered the National Guard. After completing his service, he became a partner at the law firm of White, Hamilton, Wyche and Shell. His successful legal career spanned over 50 years and he was a proud perfectionist. His primary focus was corporate law. In addition, he represented the Petersburg Hospital Authority for 30 years and has been legal advisor to The Cameron Foundation since its inception in 2003. He was an avid reader with an extensive library. He and Elizabeth loved to travel. He was a loyal friend and a doting father and grandfather. One of his favorite times was reading to his grandchildren. A celebration of his life will be held at 11:00 a.m. on Tuesday, March 8, 2022 at Christ and Grace Episcopal Church. The family will receive friends immediately after the service in the Parish Hall. The family is being served by J.T. Morriss & Son Funeral Home, Petersburg Chapel. In lieu of flowers, donations may be made to Christ and Grace Episcopal Church, 1545 South Sycamore Street, Petersburg, VA 23805, or to the charity of your choice. Condolences may be registered at www.jtmorriss.com.

The family of Samuel Pettaway Johnson, III created this Life Tributes page to make it easy to share your memories.

Send flowers to the Johnson family.