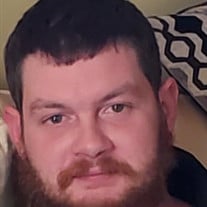 Ryan Christopher Ambrose, 32, beloved son, grandson, brother, uncle, nephew, cousin and friend, became our guardian angel on Saturday, February 19, 2022. He is joining in Heaven his dad, Kevin Ambrose; grandparents, Lester and Rowena Puckett; great-grandmothers, Catherine Johnson and Grace King; and cousin, Philip Alkire. Leaving behind his momma, Penny Ambrose; step-in-father, Rodney Nash, Jr.; sister, Kelsey (Mike) Walke; grandparents, Mary (Daniel) Boswell, Jerry (Shirley) Ambrose; aunt, Paula (Dawn) Alkire-Burden; uncle, Curtis (Tina) Ambrose; niece, Skylar Walke; nephew, Malachi Walke; numerous great-aunts, uncles, cousins, and friends he considered family. Ryan graduated LC Byrd High School in 2008 and was an Eagle Scout who was (mostly) always prepared. He loved fishing, video games, movies and Batman. While not all of his decisions were the best, he always accepted them and moved forward. He could be the biggest jerk at times (especially if you were trying to wake him up and he wasn't ready) and then be the most thoughtful. He had a heart of gold with a soft spot for kids, and if he could help someone, he was always there, all they had to do was let him know. Once you got him started, he was a great worker that took pride in what he did. From cutting grass to laying floors, he tried his best and at times was his own worst enemy. He was his momma's boy and was proud of that title. The family will be celebrating his life on Saturday, February 26, 2022 at 3:00 p.m. at J.T. Morriss & Son, 3050 W. Hundred Road, Chester, Virginia. They will be accepting visitors starting at 2:00 p.m., and will have a small reception afterwards for those who wish to share memories at Dunlop Farms Senior Apartments Clubhouse located at 1000 Dunlop Place, Colonial Heights, Virginia. In lieu of flowers, memorial contributions may be donated to charities for children. Condolences may be registered at www.jtmorriss.com.

The family of Ryan Christopher Ambrose created this Life Tributes page to make it easy to share your memories.

Send flowers to the Ambrose family.