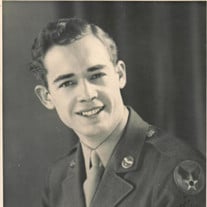 Rudolph Edward Switzer, 96, devoted husband, father, grandfather, and great grandfather, passed away peacefully Saturday, February 20, 2021 at his home with his family by his side. Rudolph (Rudy) was born on October 21, 1924 in Roanoke, Virginia as the oldest son of Harvey Cornelius Switzer Sr. and Priscilla Smith Switzer, both now deceased. After graduation from Andrew Lewis High School, he was drafted into the Army Air Force (later known as US Air Force) in 1943 and served 4 years during WWII in England and Germany and afterwards 6 years in the reserves. During his assignment with the 8th air division at Warton Air Force base in Lancs, England, Rudy met his wife of 76 years, Avril Lewis Switzer, who together shared an inseparable love and unparalleled friendship. After returning to his hometown for 14 years, Rudy relocated his family to Hopewell, Virginia in 1960, quickly making friends with coworkers and neighbors and remained a longtime member of the Wesley United Methodist Church. He worked for Honeywell Corp. (formerly Allied Chemical Fibers Division) for over 27 years, retiring as maintenance coordinator after working many years as supervisor in “draw twist 26” of the plant. Rudy was highly respected as a kind and fair man. Rudy was an avid outdoorsman who enjoyed hunting, fishing, and gardening but more than anything, maintaining his large yard and flowers beds. He felt alive in the fresh air with a little bit of dirt under his nails and only in the last year, hired someone to take over the tasks. Rudy possessed a keen sense for problem solving and could repair anything. After retirement, Rudy and his beloved wife Avril, enjoyed traveling on cruise ships to the various Caribbean islands with local travel groups Rudy is preceded in death by his 3 month old infant son, Scott Edward Switzer, by his younger brother, Harvey Cornelius Switzer, Jr. & wife Doris Hayden Switzer, mother in law Joan Lewis-Lewis, son in law, Steven Piczak. Rudy is survived by his loving wife of 76 years Avril Switzer, daughter Sharyne Graham (husband Barrett Graham), son Steven G. Switzer, daughter Lisa Kaempf, granddaughter Meredith Sylvester (husband Peter Sylvester), great grandsons Noah and Dominic Sylvester, nephew Roger Lee Switzer, sisters in law Daphne McDermott and Roberta Abell, niece Jude McDermott, and numerous other nieces, nephews, cousins, and their families. In lieu of flowers, the family has requested any memorial contributions be made to Hopewell VFW Post 637 at 335 South 15th St. Hopewell, VA 23860 in care of Commander Dennis C. Kennedy. Online guest book is available at www.JTMorriss.com. A private family graveside service was observed.

Rudolph Edward Switzer, 96, devoted husband, father, grandfather, and great grandfather, passed away peacefully Saturday, February 20, 2021 at his home with his family by his side. Rudolph (Rudy) was born on October 21, 1924 in Roanoke, Virginia... View Obituary & Service Information

The family of Rudolph Edward Switzer created this Life Tributes page to make it easy to share your memories.

Send flowers to the Switzer family.