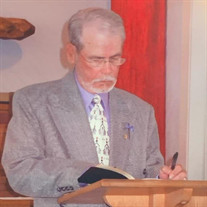 “Many are the afflictions of the righteous: but the Lord delivereth him out of them all.” - Psalm 34:19 Ronald Dixon Plyler, of Chesterfield County, beloved husband, father, grandfather, brother and son, was released from his earthly bonds into the arms of our Lord and Savior on May 27, 2021. Born on May 12, 1947 in Albemarle, NC to Beatrice M. Plyler (Biggs) and Elvin G. Plyler (both deceased). He lived much of his life in his cherished North Carolina, but called Virginia home for many years. Upon graduating from Rock Hill High School, he enlisted in the Army. After discharge in 1968, he enrolled at Winthrop College on the GI Bill, graduating in 1975. Ron’s chosen career was in business and finance. He excelled, for decades, as a finance manager in the automobile industry. When God closed that door, he opened a window. Upon retiring, Ron attended studies at Baptist Theological Seminary of Richmond, which lead to his pastorships at Rowanta Independent Church in Dinwiddie County for two years and Reams Chapel (In His Footsteps Christian Center) in Dinwiddie for a year and a half until failing health resulted in full retirement. His faithfulness to the Lord and his passion for humanitarian service guided his spirit. Ron was an exemplar steward who espoused Matthew 10:16 “be wise as serpents, and harmless as doves.” He was a kind and faithful steward of grace, using the gifts God gave him to serve God’s kingdom. Ron is survived by his loving and devoted wife of 44 years, Lucinda B. Plyler (Cindy), daughter Anissa B. Miller (Troy) and son Charles Boulware (Janie), grandchildren Austin Miller, Kyle Miller, Afton Boulware, Brandi Boulware, Amanda Boulware, six great-grandchildren and sister Deborah B. Barksdale (James). The family acknowledges and gives heartfelt thanks for the services of Saint Francis Hospital and Legacy Hospice and especially dedicated nurse Marilyn O’Neil and care aide Tequila. In lieu of flowers, contributions if desired, can be made to Oak Grove United Methodist Church in Dinwiddie County at 12715 Acorn Drive, Petersburg, VA 23805. Funeral services will be held on Tuesday, June 1 at 12:00 p.m. in the Dinwiddie Chapel of J. T. Morriss & Son Funeral Home with the Reverend Robert Dawson officiating. Interment will follow in Oak Grove UMC Cemetery. The family will receive friends at the funeral home on Tuesday, June 1 from 11:00 a.m. to 12:00 p.m. Condolences may be registered at www.jtmorriss.com

&#8220;Many are the afflictions of the righteous: but the Lord delivereth him out of them all.&#8221; - Psalm 34:19 Ronald Dixon Plyler, of Chesterfield County, beloved husband, father, grandfather, brother and son, was released from his earthly... View Obituary & Service Information

The family of Ronald Dixon Plyler created this Life Tributes page to make it easy to share your memories.

“Many are the afflictions of the righteous: but the Lord delivereth...

Send flowers to the Plyler family.