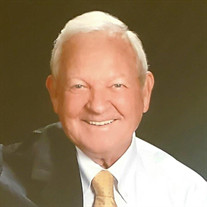 Ronald Thomas Elder, Sr., 82 of Petersburg, VA passed away peacefully at his home on Sunday June 20, 2021. He was preceded in death by his parents, Edward and Lelia Elder; and his loving wife of 47 years, Kathryn Wright Elder. He is survived by his sons, R. Thomas Elder, Jr. and wife, Sonyia; Charles A. Elder and girlfriend, Cheryl; grandchildren, Brett, Jake, Kailey, Elliss, and Raina Elder; sister, Carol Elder Langford; brother, Edward Marshall Elder, Sr.; half-brother, John C. Holmes; as well as numerous extended family and friends. Ronnie was born in his home at 626 Wesley Street, Petersburg, at 12:04am January 1st, 1939. He started working at 8 years old delivering groceries on his bicycle. He graduated from Petersburg High School in 1956 where he played trumpet in the marching band. He was a faithful member of Christ & Grace Episcopal Church where he served on the vestry. Ronnie was fascinated with cars and racing at an early age. He was the car owner of Lennie Pond’s #1VA late-model sportsman state championship winning racecar in the early 1970’s. In 1972, Richard Petty convinced Ronnie and Lennie to move up to the NASCAR Winston Cup racing series. Lennie won Rookie of the Year honors in 1973 and was the winner of the 1978 Talladega 500. Ronnie founded Virginia Concrete Construction Company in 1966 at the age of 27 and worked there the remainder of his life. (He might have been restoring cars the last several years instead of working though.) He was also involved in land development and had other businesses related to the construction field. He provided excellent care for his wife, Kathie, the love of his life, who had Multiple Sclerosis. After his diagnosis of multiple myeloma in 2012 he received excellent care from VCU Massey Cancer Centers at Stony Point and Richmond Downtown. Ronnie and his family are very grateful for the care he received from Gail, Mary, Nancy, and the staff at Crater Community Hospice. The family will receive friends Tuesday June 22, 2021 from 5:00 p.m. to 7:00 p.m. at J.T. Morriss & Son Funeral Home Petersburg Chapel, 103 S. Adams St. Petersburg, VA 23803. A funeral service will be held Wednesday June 23, 2021 11:00 a.m. at Christ & Grace Episcopal Church, 1545 S. Sycamore St. Petersburg, VA 23805. Interment will follow in Blandford Cemetery. In lieu of flowers, contributions can be made in honor of Ronnie to the VCU Massey Cancer Centers P.O. Box 843042 Richmond, VA 23284 or Crater Community Hospice, INC. 3916 S. Crater Rd. Petersburg, VA 23805. Condolences may be registered online at www.jtmorriss.com

Ronald Thomas Elder, Sr., 82 of Petersburg, VA passed away peacefully at his home on Sunday June 20, 2021. He was preceded in death by his parents, Edward and Lelia Elder; and his loving wife of 47 years, Kathryn Wright Elder. He is survived... View Obituary & Service Information

The family of Ronald Thomas Elder, Sr. created this Life Tributes page to make it easy to share your memories.

Send flowers to the Elder, family.