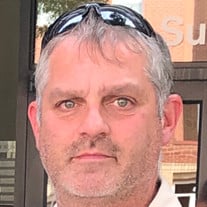 Roger Colby, age 51, from Chesterfield County, left us to be with the Lord on Sunday, January 23, 2022. Roger was preceded in death by his father, Joseph Colby, Sr.; and his stepfather, Jerry D Gleason, Sr. Roger leaves behind his wife of 22 years, Margie Colby; his daughter, Meagan Colby; mother, Kaye Gleason; brother, Joe Colby (Roxanne); brother, Tim Colby (Kim); and sister, Kristie Powers (Brian). He also leaves behind many nieces and nephews and extended family who dearly loved him and several precious Chevrolets. Roger grew up in Chesterfield County, VA. He graduated from Lloyd C. Bird High School class of 1989. He proudly served in the Army from 1992 to 2002 starting out in the 224th Aviation as a Ground Maintenance and finishing his military career in B. Co 429th FSB. Roger had taken several technical classes over the years and was a well-known auto technician. He volunteered for the Hopewell Police Auxiliary and was a member of the American Legion. He participated in several rides to honor veterans. Roger loved spending time with his family going to the beach, drag racing, car shows, shooting range, and hanging at the campground. He also loved Christmas and going to see the Christmas lights. He was a true car guy and loved anything to do with racing. He was part of the East Coast Pro Street racing club and won several awards for his 69 Camaro. He was always eager to help a friend in need and always made friends wherever he went. Family will receive friends Friday, February 4th, 6 pm - 8 pm at J.T. Morriss & Son Funeral Home Chester Chapel, 3050 W. Hundred Road, Chester, VA 23831. Funeral services will be held at the J.T. Morriss & Son Chester Chapel, Saturday, February 5th at 10am. Immediately followed by a last ride down Rte 1, and interment at Sunset Memorial Park. We ask all his friends to please bring their classic cars/street legal race cars for his last ride and wear your racing shirts. In lieu of flowers, the family asks that you send donations to the Tunnel to Towers Foundation, 2361 Hylan Boulevard, Staten Island, NY 10306 (Tunnel to Towers Foundation (t2t.org)) in Roger's honor. Condolences may be registered at www.jtmorriss.com.

Roger Colby, age 51, from Chesterfield County, left us to be with the Lord on Sunday, January 23, 2022. Roger was preceded in death by his father, Joseph Colby, Sr.; and his stepfather, Jerry D Gleason, Sr. Roger leaves behind his wife of 22... View Obituary & Service Information

The family of Roger Myron Colby created this Life Tributes page to make it easy to share your memories.

Roger Colby, age 51, from Chesterfield County, left us to be...

Send flowers to the Colby family.