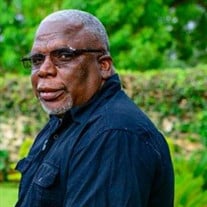 Robert Pride was the last of seven children born July 11, 1965 in Brooklyn, New York to the late Willie Pride and Ruby Johnson. Robert known to many as “Rob”, is survived by his wife Rudo Pride, two brothers William and Edward of Brooklyn, NY, 6 children Latesha, Devonique, Robert Jr, Dominic, Michael and Christian, two grandchildren Noah and Siniyah and a host of family and friends. Robert received his education in the public school system of New York City and higher education from Park University culminating in a B.S. degree in Social Psychology. On 10/02/1995, at the age of 30yrs old Rob re-enlisted in the United States Army and retired as a Staff Sergeant on 9/30/2013. He also previously served in the Army from 12/17/1983 - 4/23/84 and the US Navy from 10/25/1990 - 12/24/1992. During his 20+ years in the military, Robert served in multiple combat zones and the US Army recognized him for his honorable service with numerous Army commendations including the Army Commendation Medal and the National Defense Service Medal w/ Bronze Service Star. His multiple deployments also awarded him the Global War on Terrorism Medal and Kuwait Liberation Medal among many others. In all his years of service Rob was most proud and humbled by the opportunity he had to shape and impact the lives of his soldiers as a father figure, mentor, brother, friend and NCO. Anyone that knows Rob, knows that he was a sports fanatic who enjoyed watching and playing sports especially basketball and baseball. He was a diehard NY Yankee and Giants fan, not forgetting his beloved NY Knicks….until Brooklyn acquired the Nets and then it was Brooklyn Nets for life. Robert was funny, he loved to joke and laugh and to make others laugh as well. He loved God and his family and friends with a fierceness that cannot be matched so it’s only fitting that his favorite scripture comfort all of us who are deeply grieved by his loss “Trust in the Lord with all your heart and do not lean on your own understanding. In all your ways acknowledge him and he will make straight your path” Proverbs 3:5-6 (ESV). Please join us for the memorial service to celebrate the life of Robert Pride. We will gather on Monday September 27, 2021 at 1:00 p.m. at Cornerstone Assembly of God church, 10551 Chalkley Road, Richmond VA 23237. For our family and friends near and far who cannot attend the service, it will be streamed via the following link http://www.cornerstone.ag/live The service will be directly followed by the Military Honors Guard at 3:00 p.m. at Amelia Veterans Cemetery, 10300 Pridesville Rd, Amelia Court House, VA 23002. For our family and friends near and far who cannot attend the Military Honors Guard, it will be streamed via Facebook live. The link will be posted on both Rudo and Robert Pride's Facebook pages by 3pm on 27 September 2021. Condolences may be registered at www.jtmorriss.com.

Robert Pride was the last of seven children born July 11, 1965 in Brooklyn, New York to the late Willie Pride and Ruby Johnson. Robert known to many as &#8220;Rob&#8221;, is survived by his wife Rudo Pride, two brothers William and Edward of... View Obituary & Service Information

The family of Robert Pride created this Life Tributes page to make it easy to share your memories.

Send flowers to the Pride family.