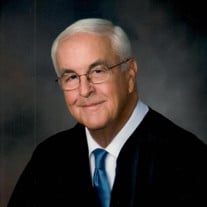 Judge Robert D. Laney, 83, died peacefully, surrounded by his family on December 15, 2021 after a brief illness. Born September 25, 1938 in Petersburg, Virginia, Judge Laney was preceded in death by his parents, Arthur Dale Laney and Gladys S. Laney; and his sister, Betty L. Holt. Judge Laney is survived by his wife of 36 years, Rebecca Dale Laney; daughter, Jennifer Laney Reed, and husband, Matthew; their sons, Mitchell, Tucker, and Gray; daughter, Susan Laney, and partner, William Riley; and her daughters, Jennifer and Ireland; son, Matthew Dale Laney; his devoted canine companion, Sunny Girl; and several nieces and nephews. When Judge Laney was 15 years old, his father died. His mother never remarried, and as a single parent, she raised both her son and daughter who were separated by only eleven months. As a youngster, Laney was active in many activities, but he was most proud of his participation in the Boy Scouts; the SCA, where he was elected President; and playing on the football team for the Petersburg Crimson Wave. Laney graduated from Petersburg High School in 1955. In addition to these activities, Laney began working as a teenager and continued to work until just recently when he became ill. He began delivering the Progress Index, and over the years, he drove an ice cream truck; and sold textbooks. In 1955, Laney enrolled at the University of Michigan where he studied Conservation and Forestry. In 1958, Laney enlisted in the U.S. Navy where he served as a Corpsman, touring the Mediterranean on board the USS Barton DD-722 until 1960. After serving his country, Laney returned to Richmond and graduated from the University of Richmond in 1962 with a degree in Business Administration. Laney was the President of Sigma Chi fraternity while at the University of Richmond. In 1971, Laney graduated from TC Williams School of Law at the University of Richmond. He opened a practice with William N. Humphries, Jr. in Colonial Heights, where they practiced together until Humphries went on the bench. Laney was sworn in by Judge Earnest P. Gates as a substitute Judge in 1974, and while he remained in private practice, he also served as a part-time Assistant Commonwealth’s Attorney under Oliver “Skitch” Rudy from 1974 to 1976. In 1984, Laney was sworn in by Judge Gates as a full-time Judge of the General District Court for the 12th Judicial Circuit serving Chesterfield County and the City of Colonial Heights. Judge Laney retired in 2009 at the mandatory retirement age. He had served as the Chief Judge a number of years during his tenure. In retirement, Judge Laney continued to sit in the district courts throughout Central Virginia. He loved serving the citizens of the Commonwealth in this capacity. He never desired to be elevated to the Circuit Court because he felt he had the best job anyone could have in the legal profession. Judge Laney never ceased being impressed by the story’s litigants told or by “good lawyering.” Judge Laney served and will continue to serve as the model for any Judge in the district courts of the Commonwealth. His steady but stern demeanor was undergirded by unfailing fairness, compassion, consistency, and common sense. He will be sorely missed by any lawyer who appeared in front of him; any clerk who sat with him; any Sheriff’s Deputy who stood by him; and most importantly, any litigant who wished to be heard. Judge Laney enjoyed many pleasures in his life, such as going to the horseraces; watching baseball, especially his beloved Boston Red Sox; watching the University of Michigan beat Ohio State in football, as they did just a few weeks ago; going to breakfast with friends on Sunday mornings at the Fraternal Order of the Eagles in Petersburg; and collecting baseball memorabilia. But few things brought him as much pleasure as coaching his son, Matthew, in little league baseball, and then travelling to watch his son play baseball in college and professionally in the minor leagues. A celebration of Judge Laney’s life will be held on Saturday, January 15, 2022 at the Ironbridge Baseball Academy, 11400 Ironbridge Road, Chester, VA from 3:00 p.m. to 6:00 p.m with food and beverage provided, casual attire encouraged. An open mic time will be held at 4:00 p.m. for friends and family to share their memories and stories about Judge Laney. The family is being served by the Chester Chapel of J.T. Morriss & Son Funeral Home and condolences can be registered at www.jtmorriss.com.

The family of Robert Dale Laney created this Life Tributes page to make it easy to share your memories.

Send flowers to the Laney family.