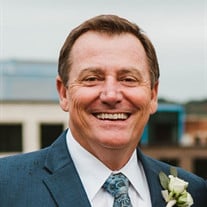 Robert was the best of men. An honorable man of conviction, he beat the odds and rerouted his life, leaving behind an enduring legacy of family, faith, and integrity. He died February 18, 2022 surrounded by his wife and children. Robert spent his boyhood in Texas, freckle-faced, riding horses, throwing footballs and getting into mischief. Somewhere deep within him was a stalwart conviction for what life and family should be. He fought for it. At 12 years old, he made a decision that changed the trajectory of his life, moving to Fayetteville, Arkansas to live with his aunt and uncle and setting himself on a path centered on faith and love of family. There he met and married his high school sweetheart, Cheryl. Together, they had three children and filled their home with George Strait and Eagles music, laughter, and the supplies for whatever new hobby Robert had at the time. They traveled the country and the world as a military family, always proving that home wasn't a house - it was where they all were together. A love without end, amen. The pride of Robert's professional career was his 25 years of service in the U.S. Army. He enlisted in 1984 and joined the 68th Air Defense Artillery at Fort Hood, Texas. After achieving the rank of Sergeant, Robert believed he had what it would take to be a commissioned officer. He fought for it. Through the Army's "Green to Gold" program, he became commissioned as a Second Lieutenant in the Aviation branch, flew the OH-58 Delta helicopter, and went on to serve as commander, serving tours in Germany, Somalia, and Bosnia. In 1999, he joined the Army's Acquisition Corps. He completed his Master's Degree and served in Amman, Jordan in support of Operation Iraqi Freedom and in Baghdad, Iraq as DCMA Officer-in-Charge for the International Zone. He retired in 2009 as Lieutenant Colonel. Never too old to set a new goal or dream a new dream, Robert decided to pursue a career as an attorney. At 51 years old, he studied like heck for the LSAT, attended law school at Regent University, graduated with a Juris Doctor, and passed the Virginia State Bar exam on his first attempt. He practiced private law for several years, before once again finding a home with the U.S. Army as a defense contract attorney. A lifetime learner and pursuer of hobbies, he was an avid golfer, taught himself to play guitar, rooted for the Dallas Cowboys through good times and bad, and took meticulous care of his yard and pool. He and Cheryl found serenity in Hawaii, where they traveled together many times. He loved to tell stories from his childhood and his military career. He jingled his keys in his pockets when he laughed and had a smile that would light up his entire face. Eight years ago, Robert was diagnosed with interstitial lung disease. Rather than let it get the best of him, he doubled down on his fight for life. In the last months of his life, he was playing his best golf game of his life, including making his first hole-in-one (on July 20th, hole #9, 160 yards, with an 8 iron). He was leading a men's Bible study, searching the stars with his telescope, and dancing at his children's weddings. He was giving advice and jumping into his truck to help whenever someone called. He was attending swim meets, visiting for preschool story time, cannonball jumping into the pool, and eating lunch at the elementary school cafeteria with his grandkids. He was spending hours hunched over his Bible, hungrier than ever for the faith that had given him so much to fight for. Robert will be known for the fierceness with which he loved people, the fight he extended for what he believed in, and the pride he felt for his family. Robert actively lived a life of faith. He flipped the script. He chose a new story, one that will last for generations. Robert is survived by his wife of 42 years, Cheryl; a daughter, Jessica Mancari, and her husband, Timothy Mancari; and two grandchildren, Emerson and Ezra Mancari; a son, Wesley Gould and his wife, Amy Gould; and a daughter, Janna Gould and her husband, Kevin McKenna. A visitation will be held at J.T. Morriss & Son in Chester, Virginia on Friday, February 25, 2022 from 6:00 p.m. to 8:00 p.m. A funeral service will be held at Cornerstone Church in Chester, Virginia on Saturday, February 26, 2022 at 11:00 a.m. Burial will be at Arlington National Cemetery at a later date. The family requests face masks during the visitation and service.

Robert was the best of men. An honorable man of conviction, he beat the odds and rerouted his life, leaving behind an enduring legacy of family, faith, and integrity. He died February 18, 2022 surrounded by his wife and children. Robert spent... View Obituary & Service Information

The family of Robert Jay Gould created this Life Tributes page to make it easy to share your memories.

Robert was the best of men. An honorable man of conviction, he...

Send flowers to the Gould family.