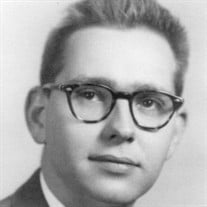 Richard Anton Uhrig, a resident of Lucy Corr Assisted Living in Chesterfield, VA, passed away Friday, Dec. 17, 2021 at the age of 91. Known to all as Dick, he was born in New York City on Oct. 2, 1930, the son of Kurt Uhrig and Pauline Bertha Sachs, recent immigrants from Germany. Dick’s early life was hard. First, he was born at the onset of the Great Depression. His father, ruined by the stock market crash of ’29, had very little. Second, he lived in eastern Germany during WWII. His father, seeking opportunity, returned to Germany in ’39. Dick, his mother, and older sister Ruth followed in Dec. ‘41, just one week before the US declared war. Dick remained in Germany throughout the war’s duration, unable to return to the states until Aug. ‘46. On his return, Dick settled in Cliffside Park, NJ with an aunt and uncle. He graduated from Cliffside Park High School in ‘49, then Lafayette College in ‘53. During the summers of ‘51 and ’52, Dick worked at “Lenape Village,” a resort in the Poconos where he met the owners’ daughter, Elly Keiser. Two and a half years later, Dick and Elly eloped on Nov 7, 1953. They were married for 67 years until her death. Immediately after their marriage, newly commissioned Lt. Uhrig (US Army) shipped off to Europe; his bride, Elly, was able to follow a few months later. Dick was stationed in Germany for five years, living at many different locations across the country. They returned stateside in ‘58, where Dick’s early assignments took them to Fort Bragg, NC; Fort McClellan, AL; and Camillus, NY. In ’67, they moved to Chester, VA, and resided at their house at 12710 Percival Street for nearly 44 years until 2011. They then moved to the retirement community at Lucy Corr Village. On April 30, 1976, after serving his country for nearly 23 years, Dick retired from the Army as a Lt. Colonel. He worked briefly for the Garcia corporation in Teaneck, NJ until July ‘77. Then, in ‘79, the Republican party recruited Dick to run for Treasurer of Chesterfield County. He ran a valiant but unsuccessful campaign. About 1980, Dick found his second act: serving with the Bensley-Bermuda Volunteer Rescue Squad. Dick logged thousands of hours and hundreds of calls as a driver and paramedic. He served as an instructor for EMT-B and other paramedics. He also held a number of administrative positions including Chief of Operations (‘85), Vice President (‘87-’88), and President (’98). Dick also actively volunteered for the Thomas Dale High School Band Boosters, serving as president for several years. Dick was an avid bridge player and led a local duplicate game for many years. Dick was a life-long learner. In addition to his high school and college degrees, he earned a master’s degree in Business Administration from Syracuse University ’65 and an AA degree in Automotive Technology from John Tyler Community College ’86. Dick was preceded in death by his parents, sister and wife. Dick and Elly had a large and loving family; they are survived by 8 children, Rick (Cathy) Uhrig, Lee Uhrig, Bob (Carolyn) Uhrig, Shirley (Greg) Griffith, Kathy (Christof) Braun, Mary (Kevin) Phillips, Tom (Waree) Uhrig, and Bill (Kristen) Uhrig; 15 grandchildren, April (Patrick) Duffy, Jessica (Adam) Cooper, Chris (Jennifer) Scott, Tim (MacKenzie) Braun, Lukas Braun, Kate Phillips, Jonathan Phillips, Richard Uhrig, Sam (Intan) Braun, Michael Uhrig, Billy Uhrig, Andrew Uhrig, Jeff Uhrig, Josh Uhrig, and James Uhrig; 10 great-grandchildren, Madison, Sydney, Caleb, Sophia, Tucker, Greyson, Cayden, Stella, Benni, and James; and 1 great-great granddaughter, Journi. An in-person funeral is being planned for July 2022. In lieu of flowers, donations can be sent to Chester Presbyterian Church. The family is being served by the Chester Chapel of J.T. Morriss & Son Funeral Home and condolences may be registered at www.jtmorriss.com.

Richard Anton Uhrig, a resident of Lucy Corr Assisted Living in Chesterfield, VA, passed away Friday, Dec. 17, 2021 at the age of 91. Known to all as Dick, he was born in New York City on Oct. 2, 1930, the son of Kurt Uhrig and Pauline Bertha... View Obituary & Service Information

The family of Richard Anton Uhrig created this Life Tributes page to make it easy to share your memories.

Send flowers to the Uhrig family.