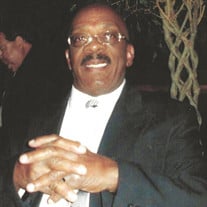 Richard Lancelot Leslie was born on November 3, 1938 to Estella E. Hinds and Clarence M Leslie in Belize City, Belize (formerly British Honduras). Richard went to rest February 4, 2021. He was the fifth of nine children. He had four brothers (William, Kent, Boris, and Ernest) and four sisters (Barbara, Emily, Gilda and Margaret). Richard was educated in Belize public schools. In Belize he pursued painting, bodybuilding, barbering and tailoring. After Hurricane Hattie in 1961, Richard migrated to New York seeking employment and more opportunity. On July 6, 1963, Richard married Mavis Stamp, and from that union three children, Deborah Dawn, Mark Richard, and Frances Marie were born. The couple divorced in 1981. He later had son Richard Lancelot II. Richard met Gloria Walker in May 1994 and they married in January 2016. Richard retired from the U.S. Army as a Staff Sergeant. Richard was a Paratrooper with the 82nd Airborne Division from 1962-1964. He also retired from the U.S. Postal Service where he worked as an electronics technician for over 27 years. For his third career, Richard resumed his painting hobby. He exhibited at many festivals and shows, winning many awards. Richard was a former President of the Petersburg Area Art League, the Portrait Artists of America, and a member of Washington Society of Portrait Artists. He was also a member of the Bon Air Artists Association; Vice President of the Chester Artist Association and a member of the Board of Directors for the Chesterfield Center of the Arts Foundation. During an interview about his art Richard said, “My ability to draw and paint is a God given gift. I give all the glory to God”. Richard and Gloria loved cruising. They usually took two trips per year. He enjoyed cooking, track and field, boxing, watching football and sewing clothing and accessories for his family. He loved learning: teaching himself computers, the internet and taking numerous online Christian courses. Left to cherish his memory are his wife Gloria; children Deborah, Mark, Frances, and Richard II; his only grandchild Autumn Ballard, his sisters Emily (Vernon), Gilda and Margaret; his brothers Rev. William Leslie and Boris, several nieces, nephews and cousins, numerous friends and loved ones. He was preceded in death by his parents, sister Barbara, and brothers Kent and Ernest. In lieu of flowers, the family asks that donations in Richard's honor be made to the Salvation Army: https://www.salvationarmyusa.org/usn/. Richard and his family are being cared for by J.T. Morriss & Son Funeral Home, Chester Chapel. Condolences can be registered at www.jtmorriss.com.

The family of Richard Lancelot Leslie created this Life Tributes page to make it easy to share your memories.

Richard Lancelot Leslie was born on November 3, 1938 to Estella...

Send flowers to the Leslie family.