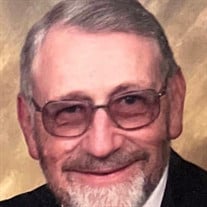 Raymond Paul Rayner, Sr., 85, passed away on February 3, 2022. He was born on September 1, 1936 in the Woodlawn area of Prince George, Virginia to the late Rufus Aaron and Julia Koren Rayner. He lived his entire life in the Prince George/Hopewell area. Fondly known as PawPaw or Pops, Mr. Rayner was a beloved father, grandfather, husband, and brother. He was a life-long member of Nazareth Lutheran Church and was an electrician at Honeywell until his retirement. He enjoyed spending time with his family, fishing, hunting, and tending to his renowned tomato and cucumber garden. The rest of the time, he could be found crafting or fixing even the most challenging mechanical project in his workshop. He was the man to call when you needed to have something built or repaired. He was known for sneaking a treat to his grandchildren and great-grandchildren - and more often than not enjoying a treat himself. Mr. Rayner was preceded in death by his parents; cherished wife, Margaret Oleyar Rayner; and siblings, Lena Marie Crowder of Newsoms, Virginia, William of Hopewell, Virginia, Gerald of Hopewell, Virginia, and Gary of Hopewell, Virginia. He is survived by one son, Raymond P. Rayner, Jr. and his wife, Manya; one daughter, Terry Sweitzer and her husband, Raymond; four grandchildren, Shane Sweitzer and his wife, Whitney, Brett Sweitzer and his fiancée, Katie Rowley, Alexandra Rayner, and Margo Rayner; three great-grandchildren, Rayner, Reid, and Emersyn Sweitzer; and one brother, Bruce Rayner of Prince George, Virginia. Visitation will be held in the Nazareth Lutheran Church on Monday, February 7, 2022 at 1:30 pm, followed by a funeral service at 2:30 pm. Memorial contributions may be made to Nazareth Lutheran Church, 1711 Grant Street, Hopewell, VA. Condolences may be registered with www.jtmorriss.com.

Raymond Paul Rayner, Sr., 85, passed away on February 3, 2022. He was born on September 1, 1936 in the Woodlawn area of Prince George, Virginia to the late Rufus Aaron and Julia Koren Rayner. He lived his entire life in the Prince George/Hopewell... View Obituary & Service Information

The family of Raymond Paul Rayner, Sr. created this Life Tributes page to make it easy to share your memories.

Send flowers to the Rayner family.