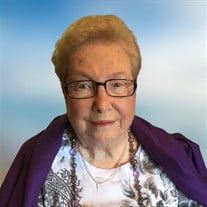 Peggy Marlene Worley Edwards, 83, of Hopewell, Virginia, claimed the promise of the resurrection on June 17th, 2021. Peggy was born on July 22, 1937. She worked for the Bank of Hopewell, was a long-time employee of George’s Drug Store, and then worked for Prince George County Social Services for more than 25 years before retiring in 2002. She was preceded in death by her parents, Homer and Ernestine Worley, and her brother, Earle Worley. She is survived by her loving husband of 63 years, Robert Lee Edwards, and three daughters, Janet Edwards Dane (Charles) of Hopewell, Virginia, Julie Edwards Jones of Chester, Virginia, and Jennifer Edwards Tuggle of Midlothian, Virginia, sister, Mary Sue Langley (Jarold). She is also survived by her grandchildren, Dr. Kristen Brightbill (Travis) of Fort Mill, South Carolina, Dr. Kathryn Dane of Baltimore, Maryland, Brooke Gilbert, of Chester, Virginia, and Brayden Gilbert of Chester, Virginia, as well as several nieces and nephews. Peggy is also survived by a faithful friend of 20 years, Annie Pryor. Peggy was a devoted Christian, wife, mother, volunteer and friend. Peggy was active in several organizations and loved to shop, go out to dinner and talk on the phone. She was a member of Wesley United Methodist Church, the Loyal Order of the Moose Lodge #110 in Hopewell where she served in several positions including Senior Regent from 2010 to 2011, the GFWC Federated Woman’s Club, the Woman’s Club of Hopewell, and the Stony Creek Chapter #126 of the Eastern Star, Red Hats. The family would like to thank the many caregivers who lovingly tended to Peggy over the last six years. The family will receive friends Sunday, June 20, 2021, from 6:00 p.m. to 8:00 p.m. at J.T. Morriss & Son Funeral Home Hopewell Chapel. A funeral service will be held 1:00 p.m. Monday, June 21, 2021, at Wesley United Methodist Church, 2901 Norfolk St. Hopewell, Virginia 23860. Interment will follow in Appomattox Cemetery. Condolences may be registered online at www.jtmorriss.com

Peggy Marlene Worley Edwards, 83, of Hopewell, Virginia, claimed the promise of the resurrection on June 17th, 2021. Peggy was born on July 22, 1937. She worked for the Bank of Hopewell, was a long-time employee of George&#8217;s Drug Store,... View Obituary & Service Information

The family of Peggy Worley Edwards created this Life Tributes page to make it easy to share your memories.

Send flowers to the Edwards family.