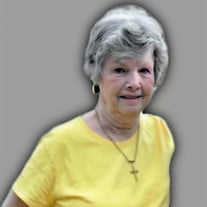 Polly Richardson Winfield, age 93, died on Thursday, February 17, 2022. She was the second child to Nora E. and Delegate Arthur Harris Richardson. She was preceded in death by her husband, Gordon B. Winfield, Jr. of 52 years. Also, her sister, Louise R. Phipps; and brother, Arthur (Sonny) Richardson, Jr. Polly and Gordon cherished their close bonds with their two surviving sons, Gordon B. Winfield III and Arthur Harris Richardson Winfield. Also, their special grandchildren, Arthur Harris R. Winfield II (Morgan), Carly Winfield Baskerville (Chip), Daniel R. Winfield (Mary Stewart) and Grace E. Winfield. She was also blessed with three great-grandchildren, Ellynore Winfield, Sutton Winfield and Channing Baskerville V. She always found time and ways to be a part of her grandchildren's lives. She is survived by many nieces and nephews, Becky Dodge, Janet Scott Sims, Lacy Haynes, Lee Davis, and Helen (Branchie) Richardson; Dr. William Phipps and John Y. Richardson. Her two loves were first her family, and her 34 years teaching young children. She wrote all her classroom plays and is especially remembered for her musical productions. She used various methods of teaching. She took her pupils on nature walks, science experiments under the school magnolia tree, a walk to the village to tour the courthouse, the post office, the bank where each got a sucker and the jail where an officer fingerprinted those who wanted to be fingerprinted. Also, trips to Jamestown, the science museum, a bus trip to Luray Caverns, for many had never been in the mountains. She saved three copies of each pupil's compositions and sent them back to them their senior years. She touched many of their lives. Many have kept up with her after retirement, she always had a big hug for each. She was a member of the Jamestown Society, the Outstanding Teachers of America Association and Lebanon United Methodist Church. There will be a funeral service at 11:00 a.m. on February 25, 2022 at the Petersburg Chapel of J.T. Morriss & Son Funeral Home, followed by a private service at Ridgeway Cemetery. The family will receive friends one hour prior to the service from 10:00 a.m. - 11:00 a.m. In lieu of flowers, donations may be made to Lebanon United Methodist Church, 12450 Court House Rd., Dinwiddie, VA 23841. Condolences may be registered at www.jtmorriss.com.

Polly Richardson Winfield, age 93, died on Thursday, February 17, 2022. She was the second child to Nora E. and Delegate Arthur Harris Richardson. She was preceded in death by her husband, Gordon B. Winfield, Jr. of 52 years. Also, her sister,... View Obituary & Service Information

The family of Pauline Richardson Winfield created this Life Tributes page to make it easy to share your memories.

Send flowers to the Winfield family.