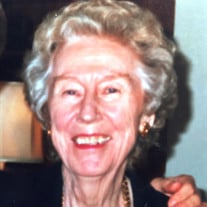 Norma Tietjen, 98, died peacefully on April 22, 2022. She was born Norma Janet Fraughton on April 28, 1923 in Malone, New York. Norma was the middle of three children, born to James Leroy Fraughton and Jessie Taylor. She studied nursing at Russel Sage College in Troy, New York, receiving her B.N. degree. Before graduating, she received the coveted "Best Nurse" award. Shortly after beginning her career in Albany, New York, she met a young doctor, John Robert Tietjen, MD. The rest is history. They married in 1945. They remained a love story throughout their lives together. The young couple were well described in Tom Brokaw's Book, The Greatest Generation. They survived the Great Depression, World War II, and had the grit and determination to work hard, love well, and serve others. Once married, Norma Tietjen put aside her nursing career to create a home for her husband and three children. The family resided in Arlington, Virginia until Dr. Tietjen retired from his position as Medical Director of the Central Intelligence Agency. The couple then moved to Petersburg, Virginia when Dr. Tietjen accepted the position of Director of Public Health in the tri-cities area. Norma Tietjen was a member of Petersburg's Cockade City Garden Club and the Women's Medical Auxiliary. She was an accomplished seamstress with a great eye for color, making everything from her own stylish outfits to a daughter's formal evening gown, as well as complicated draperies for their home. The couple were members of Christ and Grace Episcopal Church. Norma Tietjen was predeceased by her beloved husband John in 2015. She was also predeceased by her brother, Robert Fraughton; sister, Joan Spear; and son, John Robert Tietjen, Jr. She is survived by two daughters, Dr. Patricia Tietjen Demont of Springfield, Virginia and Ms. Donna J. Tietjen currently residing in Charlottesville, Virginia. She has one grandchild, Lisa Kristine Demont of Los Angeles, California. She is also survived by a brother-in-law, Dr. Merritt Spear of Peru, New York; and many nieces and nephews. Norma spent her last years in the Petersburg Home for Ladies where she began a new chapter of her life in 2016. She remained in good health, lively and loving until the end of her days. She will be deeply missed by all who knew her. A memorial service will be held at 11:30 AM Friday, May 13, 2022 at the Petersburg Home for Ladies (The Rose Room). In lieu of flowers, donations may be made to the Crater Community Hospice in Petersburg, Virginia. Condolences can be registered online at www.jtmorriss.com.

The family of Norma Janet Tietjen created this Life Tributes page to make it easy to share your memories.