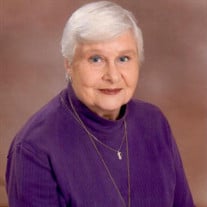 Mildred Marie Hall Leonard, 86, passed away peacefully Saturday, September 18, 2021, after an extended battle with cancer. She was born in Alexandria, Virginia and raised in Petersburg, Virginia. She was the daughter of the late Reuben John and Vera Marie Johnson Hall. She was retired but had been a homemaker and travel agent for Tickets-To-Go Travel. She graduated from Petersburg High School and was a member of St. Mark’s United Methodist Church. She volunteered with the Petersburg General Hospital Guild and then later Southside Regional Hospital Guild and was an active member of United Woman’s Methodist Association until she retired. Mildred was a widower and lost her husband, R.T. Leonard, who passed away in 2012. They were married for 68 years. Her son, John Ira Leonard, passed away from cancer in 2015. She is survived by her daughter, Dawn Marie Leonard; granddaughters, Addison Hack and Sydney Hack; her daughter-in-law, Susan Leonard; granddaughters, Meredith and Holly Leonard; and a host of other beloved family and friends. Mildred was an avid photographer and gardener. She blessed her family with 80 years of photographs chronicling a life well-lived; with travel abroad to places such as: Alaska, Europe, China, Australia, and multiple trips to Disney World in Florida. She loved red roses and never missed a summer of growing tomatoes. She was a devoted wife, mother, grandmother, and friend. A visitation will be held in her honor for family and friends at J.T. Morriss & Son Funeral Home in Petersburg, Virginia on Monday, September 27th, from 5-7 p.m. In lieu of flowers, memorial contributions may be made to a charity of your choice. Condolences may be registered to www.jtmorriss.com.

Mildred Marie Hall Leonard, 86, passed away peacefully Saturday, September 18, 2021, after an extended battle with cancer. She was born in Alexandria, Virginia and raised in Petersburg, Virginia. She was the daughter of the late Reuben John... View Obituary & Service Information

The family of Mildred Leonard created this Life Tributes page to make it easy to share your memories.

Send flowers to the Leonard family.