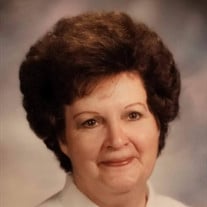 Mildred (Millie) Jane Williamson Burnham of Hopewell, VA, passed away on January 6, 2022 at the age of 89. She is survived by her four daughters, Jacqueline Burnham Dean, Nancy Burnham Gaskins, Bonnie Burnham Lashley, Billie Jo Burnham McDonald; and a son-in-law, Roger Dean. She also leaves behind 10 grandchildren, Meredith Dean, Courtney Dean, Jeff Todd (Alta), Warren Gaskins (Kelly), Sophie Gaskins, Erica Lashley, Jackson McDonald, Adam McDonald, Lydia McDonald, Charlotte McDonald; and 6 great-grandchildren, Danielle, Josh, Giovanni, George, Tessa and Avery. She also leaves behind a brother-in-law, Buck Tiller; a sister-in-law; Carol Williamson; and many nieces and nephews. She is preceded in death by her parents, James Clyde Williamson, Sr. and Sophie Pito Williamson; and her brothers and sisters, Emma Louise Tiller, James Clyde Williamson, Jr., Vincent John Williamson, MaryAnn Williamson Harris Cheek; and her ex-husband, Elwood Burnham. Mildred worked at W.T. Grant in high school. After she graduated from Hopewell High School in 1951, she began working for the Gilman Insurance Agency and Ford Insurance Company. Mildred married Elwood Burnham in 1953 and began having children and growing her family as well as enjoying working outside the home. After a move to Rio Grande City, Texas, she began working for the Texas Employment Commission. Another move to Eagle Pass, Texas afforded her an opportunity to work for the Social Security Administration (SSA). She continued working for the SSA after a move to Staten Island, New York. A couple of years later and a move to the Baltimore, Maryland area, Mildred began her Civil Service career with the U.S. Army at Ft. Meade, MD. After another move, this time to Wilmington, NC, Mildred worked for the Corps of Engineers. Eventually Mildred moved back to the Hopewell area and resumed a career in Civil Service with the U.S. Army. She moved forward in her career to a position as a Budget Analyst and ended her career as a Management Analyst. These positions provided numerous opportunities to travel across the country, including her favorites, Alaska, Hawaii, and Panama. After retiring, she worked part-time at the Hopewell Community Center and then as a bookkeeper at West End Christian School. Millie was a social person; she loved being in the middle of things. She enjoyed square-dancing, round dancing, reading, crocheting, and Sudoku. She was a member of the Women of The Moose (WOTM) for forty years. Millie became very active with the Women's Groups at church. Millie attended West End Presbyterian Church as a child but was baptized later in life at Woodlawn Baptist Church. Millie was a member of the Red Hat Society and genuinely loved her Red Hat sisters. She attended New Jerusalem Fellowship when her son-in-law, Roger Dean, was pastor. She was active with the women's group and she led the prayer chain, where she ministered to many people. Millie loved to participate in Bible Studies, where she was able to grow in her walk with the Lord. She loved participating in church programs, Vacation Bible School, and holiday celebrations. One thing that should be noted about Millie's life is that she loved her family with all of her being, especially her grandchildren and great-grandchildren. She also loved her siblings, nieces, and nephews dearly. She will be sorely missed for her generous hugs, her warm smile, and her wonderful stories. Her family will certainly miss the birth stories that she would tell at each family member's birthday. The family is being served by the Hopewell Chapel of J.T. Morriss & Son Funeral Home. The burial will be a private graveside service. Her life will be celebrated at a later date. Condolences may be registered at www.jtmorriss.com.

The family of Mildred Burnham created this Life Tributes page to make it easy to share your memories.

Send flowers to the Burnham family.