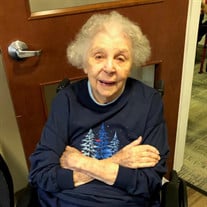 Mary Lou Beatman peacefully died on January 27, 2021 in her residence at Ironbridge by Agewell Living, she was 97. Mary Lou was preceded in death by her husband Jim Beatman and her daughter Kristie Beatman and her sisters, Jane Lee and Anne Hudock. She is survived by her sons, Jeff Beatman (Patty) and Gus Beatman, and her grandchildren, Meghan West (Brian), Kelly Long (Chris), Aiodan Beatman, Ella Beatman and Nick Beatman and great-grandchildren Avery and Bradley. Mary Lou was born April 10, 1923 and was raised outside of Philadelphia during the great depression. She graduated from Oberlin College in Ohio and received her first master’s in social work from Bryn Mawr in Pennsylvania. She received a second master’s degree in Adult Education in 1977. Mary Lou married Jim Beatman, a Navy veteran from World War II in 1946. After their college was completed, they moved to Washington DC where her husband Jim worked in the Navy Department. Mary Lou became the first female administrator (The Office for Children) in Fairfax County, Virginia’s history. There she supervised the hundreds of public day care centers in the county. Jim and Mary Lou raised three children, Jeff, Kristie and Gus in Annandale, Virginia and lived there until her retirement in 1979. After moving to Felton Delaware, She and Jim lived on their beloved 19-acre farm. Mary Lou became a long-term and beloved member of the Camden Friends Meeting (Quaker) in Camden, Delaware. Being Quaker was a very important part of her life, believing there was that of God in everyone. She was Clerk of the Meeting for many years. During her time as Clerk of the Meeting, she became involved with the Alternatives to Violence program in the Delaware prisons from 1990 until 2008. This is a life-changing, personally empowering program that is now recognized as critical to changing Delaware’s incarcerated men and women. She is still spoken of with awe and respect by the men who worked with her. She exemplified the term Matriach, a passionate, disciplined and empathetic leader who was also a wonderful mentor to the many that crossed paths with her. In 2015, she moved to Virginia to be closer to her son Jeff and his wife Patty. The Beatman family is being cared for by J.T. Morriss & Son Funeral Home, Chester Chapel. Condolences can be registered at www.jtmorriss.com.

Mary Lou Beatman peacefully died on January 27, 2021 in her residence at Ironbridge by Agewell Living, she was 97. Mary Lou was preceded in death by her husband Jim Beatman and her daughter Kristie Beatman and her sisters, Jane Lee and Anne... View Obituary & Service Information

The family of Mary Louise Beatman created this Life Tributes page to make it easy to share your memories.

Mary Lou Beatman peacefully died on January 27, 2021 in her residence...

Send flowers to the Beatman family.