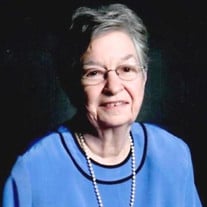 Lois Baisey Waddill, 87, of Chester died February 3, 2021. For the past 7 years, she resided at Tyler’s Retreat in Chester. She was born on November 5, 1933 in Victoria, Virginia to the late Eva and Bill Baisey. Lois was proceeded in death by her husband and true lifetime partner John Watlington Waddill. Lois was a loving and devoted sister, wife, mother, grandmother, and great grandmother. She is survived by her sister Betty B. Bailey (Mac), daughter Mary Susan Rehm (Tom); her son John Watlington Waddill, Jr. (Sherrie); her grandchildren, Virginia Christine Barnes (Kirk), John Thomas Watlington Waddill (Keegan), Anna Virginia Rehm, her great-granddaughter Riley Anne Barnes, and several nephews and nieces. Lois was beloved by her family, friends, and co-workers. She was always a very active person and enjoyed being with people of all ages. Lois had a truly positive attitude towards life, and she was compassionate and kind to everyone she met. She and John were married in October of 1954. While John was in service in Germany, Lois worked as an assistant to the Clerk of Courts at the Lunenburg Courthouse. Later, John attended Virginia Tech and once again Lois worked as a secretary on the Virginia Tech Campus. They moved to Chester in the summer of 1969 and joined the Chester Baptist Church where she was an active member for over 50 years. There she began to work in Chesterfield County at Bensley Elementary School as both an instructional assistant and the office manager until her retirement in 1995. She continued to volunteer her time to support and work with the students and staff of Bensley after her retirement. Her “Bensley family” was always very special to her. She and John traveled to many places and spent a great deal of their time at the second home they built together at Lake Gaston. Lois also volunteered many hours at the Chester Library assisting patrons. She had a very green thumb. Lois enjoyed raising orchids, lime and lemon trees and just spending time outdoors enjoying the sunshine. A graveside service will be held on Sunday, February 7th at 2:00 PM at Lakeview Cemetery in Victoria, Virginia. In lieu of flowers, the family suggests memorial contributions be sent to the Chester Baptist Church Benevolence Fund, 4317 School Street, Chester, Virginia 23831.

Lois Baisey Waddill, 87, of Chester died February 3, 2021. For the past 7 years, she resided at Tyler&#8217;s Retreat in Chester. She was born on November 5, 1933 in Victoria, Virginia to the late Eva and Bill Baisey. Lois was proceeded in... View Obituary & Service Information

The family of Lois Baisey Waddill created this Life Tributes page to make it easy to share your memories.

Send flowers to the Waddill family.