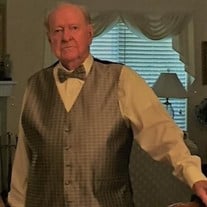 Lindbergh J. Beggs (known as Lindy) passed away peacefully on August 15, 2021, a couple of months prior to his 94th birthday. Lindy, born on Oct. 17, 1927 in Muleshoe, Texas, was one of nine children and was the last surviving member of his siblings. He was preceded in death by his first wife of 52 years, Dorothy Spain Beggs and is survived by his loving second wife of 22 years, Elsa Hallock Beggs. Lindy will be lovingly remembered by his son, Stan Beggs, daughter, Jan Beggs Ferguson (Joe) and grandson, Ryan Ferguson, along with many nieces and nephews. Lindy joined the Merchant Marines as a young man and was later drafted into the US Army, where he proudly served during the Korean War. Upon his honorable discharge from the Army, he began working as a General Electric serviceman in northern California. In 1968, Lindy, Dottie and the kids moved cross country to Chester, VA where he took over the ownership of Chester Cleaners from Dottie’s brother and his wife, Tommy and Ann Spain, and continued in that successful business for 40 years. His GE experience, plus his mechanical aptitude served him well in the dry-cleaning business as well as being the family handyman, who could fix most anything. Over the years, Lindy enjoyed traveling to many parts of the world with Dottie and continued that love of traveling with Elsa. But probably his favorite part of his life was his love of lake life and boating with his family, which began when they lived in California and continued when moving to Virginia. He spent much of his early retirement years at their Lake Anna home, where many weekends of fun were enjoyed and was the location of annual “family days.” Many friends and family members were students of “Lindy’s ski school” on Lake Anna, some more successful than others. Lindy was an active member of the Kiwanis Club of Chester for a number of years and the club members also enjoyed some events with the Beggs family at Lake Anna. A funeral service will be held at 12:00 p.m. on Saturday, August 21 at the Chester, VA Chapel of J. T. Morriss & Son Funeral Home. The family will receive friends 1-hour prior to the service, from 11:00 a.m. to 12:00 noon. Burial will follow in Mineral, VA for family members. Lindy will be remembered as a loving and wonderful husband, father, Papa to Ryan, uncle, brother, brother-in-law and friend and will be deeply missed by all who knew him. Condolences may be registered on www.jtmorriss.com.

Lindbergh J. Beggs (known as Lindy) passed away peacefully on August 15, 2021, a couple of months prior to his 94th birthday. Lindy, born on Oct. 17, 1927 in Muleshoe, Texas, was one of nine children and was the last surviving member of his... View Obituary & Service Information

The family of Lindbergh J. "Lindy" Beggs created this Life Tributes page to make it easy to share your memories.

Lindbergh J. Beggs (known as Lindy) passed away peacefully on...

Send flowers to the Beggs family.