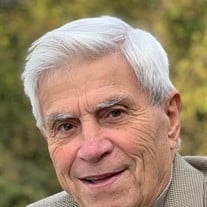 Lewis D. Bartlett, 82, of Prince George passed away on January 27, 2022. Born on October 29, 1939 in Roanoke, Virginia, Lewis was an amazing man, an incredible father, husband, grandfather ("Pop"), brother, uncle, and friend ("Butch" to many of his oldest friends). Lewis lit every room, and every life he walked into, and he will be so missed. He will be remembered for his infectious, mischievous laugh and his (almost always inappropriate) jokes. Lewis was everyone's best friend. He never met a stranger. He was steadfast in his commitment to others, and always endeavored to do the right thing. His personality was irresistible, and he possessed an unending desire to know each person and recognize the very best of them. He always found the best in anyone, and would be their greatest cheerleader on their road to success or happiness. We are all better people for having known him and having been loved by him. Lewis served in the Navy before he ventured out on his own, building a career in the Oil and HVAC industry in Hopewell, Va. An avid fan of the Washington Redskins, he and a loyal group of amazingly close friends attended almost every home game in Washington for more than 30 years, hosting epic tailgating parties. Lewis loved to travel, and he created memories in over 38 countries. He loved his time in Deltaville, Virginia with his family and friends. He was a member of the Moose Club, the American Legion, and Saltwater Anglers Fishing Club. More meaningfully, he was a member the informal breakfast club at the Quick Lunch and Lunch Club at K&L and the American Legion, where he nurtured enviable life-long, close friendships with a wonderful cadre loyal friends. Lewis is preceded in death by his mother, Virginia; and father, Hugh; father-in-law, Gene Kokinski; and his brother, Charlie. He is survived by his wife, Sherri; and by his sons, Jeff, Mark (Tammy) and Michael (Shannon). Lewis leaves behind his brothers and their loving wives, Bill and Linda, Wayne and Faye, and David and Becky; and his sister, Susie; mother-in-law, Nadine Kokinski; sister-in-law, Jeanine Gilmore; as well as his grandchildren, Chelsea, Haley, Carson, Hunter, Sydney and Ryan; and two great-grandchildren, Luke and Brooklyn; and a host of nieces and nephews. For those who wish to attend, visitation will be from 6:00 p.m. to 8:00 p.m. on Monday, January 31, 2022, and a memorial service will take place at 11:00 a.m. on Tuesday, February 1, 2022, both at J.T. Morriss & Son Funeral Home at 820 W. Broadway, Hopewell, Virginia 23860. In lieu of flowers, donations can be made to the Idiopathic Pulmonary Fibrosis Foundation (https://ipffoundation.org/donate/).

The family of Lewis Dudley Bartlett created this Life Tributes page to make it easy to share your memories.

Lewis D. Bartlett, 82, of Prince George passed away on January...

Send flowers to the Bartlett family.