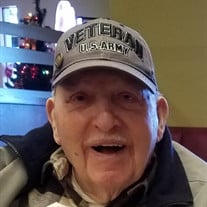 Master Sgt Leroy Victor Heinrich, U.S. Army, Retired, 97, a native of Schulenburg, Texas, passed away peacefully at his daughters’ home in Midland, North Carolina on Wednesday, April 21, 2021. He was a resident of Hopewell, Virginia, for over sixty-five years. He was preceded in death by his wife, Marianne Scheer Heinrich; son, Ralph Carl Heinrich of Chester; parents, August and Louisa Heinrich, and Brothers Willie and Elton Heinrich of Schulenburg, Texas. Master Sgt Heinrich (RET) grew up in Schulenburg, Texas, before joining the United States Army. During his career, he completed various overseas tours in Europe, Korea and Vietnam. He made his home in Hopewell after an initial assignment at Ft Lee in 1955, and Ft Lee was his last assignment upon his retirement from the Army with 27 years of Honorable and Distinguished Service. Following his military service, Leroy was self-employed as a General Contractor performing home maintenance and services throughout the Tri-Cities area. He enjoyed his job immensely, helping people, especially the elderly, and continued to work well into his eighties until completely retiring once again. His hobbies included gardening and caring for his countless types of flowers and plants. He was always in his yard, working outside, which Leroy contributed to his longevity. He also loved walking; there were few days that went by that you did not see Leroy walking down the street early in the mornings! Leroy spent the last 5 years of his life enjoying life with his daughter and son-in-law in North Carolina. Leroy is survived by his Son Leroy F. Heinrich and wife, Ann Marie of Disputanta; Daughter, Doris Evans and husband, Phil, of North Carolina; Daughter-in-Law Marie Heinrich of Chesterfield; four grandchildren, Joshua Evans (Sarah), Cherree Lawson (Crawford), Lana Heinrich (Brenda), and Hudson Heinrich; six great-grandchildren, Kyerra Will, Emma Evans, Elijah Evans, Zoey Evans, Channing Lawson, and Caden Lawson. Visitation will be held at 10:00 a.m. on Saturday, May 15, 2021, with funeral services following at 11:00 a.m. in the Hopewell Chapel of J.T. Morris, 820 West Broadway. Interment to follow in Southlawn Memorial Park with military honors.

The family of Leroy Victor Heinrich created this Life Tributes page to make it easy to share your memories.

Send flowers to the Heinrich family.