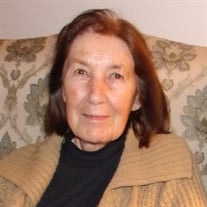 Lena Massey Whitt, of Petersburg, died on Tuesday, July 27, 2021. She was born in Graham, North Carolina in 1925, the oldest daughter of Albert W. and Hallie J. Massey. When she was a teenager, the family moved to Richmond, and Lena graduated from John Marshall High School in 1942. In 1947, she married the late J. Asa Whitt, a founding partner of a local accounting firm that was later known as Derieux, Baker, Thompson, and Whitt. During the 1950’s and 1960’s, in addition to raising a family, Lena was active in the First Unitarian Church of Richmond, where she served as the first female president of the congregation and supported the founding of the Richmond Public Forum (later renamed the Richmond Forum). She also entered Westhampton College as a part-time adult student, eventually earning a B.A. in English in 1968. Later that year she began teaching in the Richmond Public Schools, initially at Mosby Middle School and then at Thomas Jefferson High School, where she became chair of the English Department. In the 1980’s, Lena was an early board member and later Chairperson of the Richmond Community High School, an alternative public school for gifted students, the majority of whom were from socio-economically disadvantaged backgrounds. Lena earned an M.A. degree from Virginia State University, and afterward joined its faculty to teach English. She went on to earn a doctorate in English Education from the University of Virginia and continued to teach writing at Virginia State until her retirement. While teaching at Virginia State, Lena became involved in historic preservation in nearby Petersburg. In 1987, she purchased her first property, a cottage on Grove Avenue that was built circa 1790, and then directed its restoration. Over the ensuing 15 years, she organized the restoration of various other buildings in downtown Petersburg, notably the former Chesterfield Hotel on Sycamore Street, the former Leonard Hardware building on Bank Street, and the Appomattox Iron Works complex on Old Street. During the 1990’s, Lena’s work on historic preservation led to leadership roles in various Petersburg organizations, including the Petersburg Redevelopment and Housing Authority, Downtown Petersburg, the Historic Petersburg Foundation, and the Petersburg Chamber of Commerce. She was also one of the leaders of the committee that created the Appomattox Regional Governor’s School, which opened in 1999 in the restored Petersburg High School Building. Her civic activities in Petersburg culminated in service on the Petersburg City Council from 2000 to 2004, including being Vice Mayor part of that time. Lena spent her final years at the Petersburg Home for Ladies. She is survived by her son, Joseph Asa Whitt, Jr. of Aurora, IL; her daughter, Ellen M. Whitt of Highland Park, NJ; daughter-in-law, Sally A. Whitt; son-in-law Robert B. Miller; and two grandchildren, Michael Whitt (and his wife Shannon) of Aurora, IL, and Stephen Whitt of Tyler,TX. Lena is also survived by one sister, Mrs. Marie McDaniel of Amelia; and many nieces and nephews. The family will receive friends at J.T. Morriss & Son Funeral Home, 103 South Adams Street in Petersburg, on Sunday, August 1st, 4:00 - 6:00 pm. Funeral services will be held at J.T. Morriss & Son Funeral Home on Monday, August 2 at noon. Burial will take place immediately following the funeral at Sunset Memorial Park in Chester, Virginia. In lieu of flowers, memorial gifts may be made to the Alzheimer’s Association or the Appomattox Regional Governor’s School for Arts and Technology. Condolences may be registered at www.jtmorriss.com.

Lena Massey Whitt, of Petersburg, died on Tuesday, July 27, 2021. She was born in Graham, North Carolina in 1925, the oldest daughter of Albert W. and Hallie J. Massey. When she was a teenager, the family moved to Richmond, and Lena graduated... View Obituary & Service Information

The family of Lena Massey Whitt created this Life Tributes page to make it easy to share your memories.

Send flowers to the Whitt family.