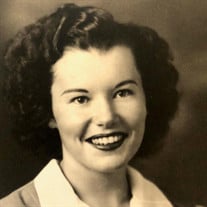 Born in Los Angeles, CA in 1926, Lea passed quietly in her sleep at home on March 4, 2021. She will be remembered as a woman who lived life with grace and on her own terms. She grew up the youngest of three daughters of Margaret and Cecil Palmateer, in Litchfield Park, AZ, where in 1943 she married her beloved husband of 63 years, Army Air Corps Captain (later Major) Benjamin Earl Cathers. They started their family shortly after the war, and lived in Kansas, Texas, Maryland, Virginia and Arizona, returning to Chester, Virginia – her favorite place to live – for their final years. Lea was a devoted homemaker and an avid traveler. She loved taking trips throughout North America towing an Airstream trailer. Later, she broadened her travels to include trips, often solo, to Asia (Thailand and China), Europe, and Central America (through the Panama Canal). Well into her 94th year she could be seen riding her lawn tractor to tend the extensive property surrounding the Chester home she loved. In later years, her research of family genealogy revealed that she is a descendant of Shenandoah Valley settler, Jost Hite. On any given day she would happily share her views on the two subjects most important to her: religion (Christian Science) and politics (Republican). Lea is survived by her sister, Bette Margaret Sargent of Seal Beach, California; four children, Benjamin David (Laura) of Richmond; Jon Patrick (Pen) of Mississippi; Lou Michelle Nanouche (Rachid) of Paris; Rebecca Lea Jackson of Arizona; 10 grandchildren; 17 great grandchildren; as well as a loving extended family. She is predeceased by her husband (2006); sister, Hattie Lou Maxfield of California (2005); daughter, Ellen Cathers Ferrell of Georgia (2020); and great-grandson, Avery of Alabama (2018). Lea was an animal lover – most notably elephants and cats. A celebration of her life will be held as a gathering of family and friends at the Richmond Zoo on April 30, 2021. Email [email protected] to reserve a ticket. No other service will be held. Memorial contributions may be sent in Lea’s name to the Richmond Zoo. Cremation arrangements are being handled by JT Morriss & Son in Chester. Private burial will be with her husband at Virginia Veteran’s Cemetery in Amelia.

Born in Los Angeles, CA in 1926, Lea passed quietly in her sleep at home on March 4, 2021. She will be remembered as a woman who lived life with grace and on her own terms. She grew up the youngest of three daughters of Margaret and Cecil Palmateer,... View Obituary & Service Information

The family of Lea Cathers created this Life Tributes page to make it easy to share your memories.