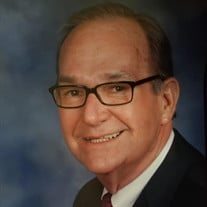 Larry Craig Tucker, a son of the late Floyd Archer and Rachel Collier Tucker, passed away on January 31 after a period of declining health. He was also predeceased by a brother, David Floyd Tucker. Larry was born in Petersburg on April 6, 1944. He was married to Elizabeth Wright (Betty Ann) Tucker, and they had two children, David J. Tucker (Lynn) and Kathryn (Kay) T. Chappell (Glenn II). He is also survived by grandchildren, Glenn Chappell III (Brittney), Leanne T. Carroll (Justin), Rachel Tucker, Elizabeth C. Simmons (Tyler), Lauren T. Morgan (Adam), and Sallie C. McCormick (Mathew); as well as by great grandchildren, Elan Carroll, Glenn F. Chappell IV, Cohen Carroll, Madeline Chappell, Reagan Simmons, and Cameron Carroll; and sister Anist Mosley (Clyde) and brother, C. Wayne Tucker. Larry graduated from Petersburg High School in 1963 and took advanced courses at Northwood Institute, VCU, and Richard Bland College. From a very young age Larry was interested in automobiles, working in 1963-65 as a service adviser with his father, who was service manager at Master Chevrolet-Cadillac. He was in the U.S. Army from 1965 until 1967, serving at Fort Jackson, South Carolina, Camp Casey Korea with the 7th Infantry Division, and Fort Lee. On the completion of his military service, he returned to Master Chevrolet-Cadillac and was service manager from 1969 until 1973. He then joined Petersburg Ford, Inc., as service manager. He became vice president in 1981 and in 1989 bought the dealership from his partner, Carter Myers. He served as president/CEO until 2000, when his son David became his partner and later president of the company. Larry assumed the role of chairman/CEO until they sold the business in 2006. Larry was a member of the Virginia Automobile Dealers Association. He served as president and received Time magazine’s Quality Dealer Award of the Southeastern United States. He also was on the Southern Virginia Ford Dealers Advertising Fund and served four years as board chairman. In 1994, Larry joined the Board of Directors of First Federal Saving Bank (now Virginia Commonwealth bank), taking on the roles of chairman of the board and the Directors Loan Committee, and as a member of the Compensation Succession Committee as a trustee of EGSOP. Long active in the community, Larry served on the Petersburg Industrial Development Authority and Planning Commission, as well as on City Council in 1994-2000 and as vice mayor. He was on the Hospital Authority, filling the roles of the chairman of the Finance Committee and vice chairman of the Board. From 1982 until his death he was a member of the Rotary Club of Petersburg (luncheon) and served a term as president. He received the designation of Paul Harris fellow. He served as president of the Historic Petersburg Foundation, chairman and member of the Grants Committee of the Cameron Foundation, president of the Country Club of Petersburg, member of the Battersea Foundation, a member of the Board of Directors of Southside Virginia Emergency Crew and president in 2006-2010, and the first president of the Willcox Watershed Conservancy. He grew up in High Street (later United) Methodist Church, serving on its Administrative Board, and when it closed, he and Betty Ann joined Christ and Grace Episcopal Church. A private graveside service was held at Blandford Cemetery. In lieu of flowers, memorial contributions may be made to Christ and Grace Episcopal Church, 1545 S Sycamore Street, Petersburg, VA 23805 or At Home Care and Hospice, 629 Southpark Blvd, Colonial Heights, VA 23834. Condolences may be registered at www.jtmorriss.com.

Larry Craig Tucker, a son of the late Floyd Archer and Rachel Collier Tucker, passed away on January 31 after a period of declining health. He was also predeceased by a brother, David Floyd Tucker. Larry was born in Petersburg on April 6, 1944.... View Obituary & Service Information

The family of Larry Craig Tucker created this Life Tributes page to make it easy to share your memories.

Larry Craig Tucker, a son of the late Floyd Archer and Rachel...

Send flowers to the Tucker family.