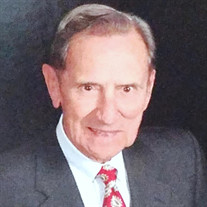 Kenneth Leslie Figg, Jr., 94, of Prince George County, VA passed away on Wednesday, May 12, 2021. Mr. Figg was born in Prince George, VA on May 16, 1926 and was the son of the late Kenneth Leslie Figg, Sr. and Virginia Trilby Dawson; and was also preceded in death by his sister, Virginia Delle Figg Dolby. Mr. Figg was a United States Navy veteran having faithfully served his county during World War II and the Korean War. Following his discharge from the Navy, he went on to serve as the Prince George Clerk of the Circuit Court, retiring in 1988 after 32 years of dedicated service. He was a charter and honorary member of the Prince George Volunteer Fire Department and member of the Prince George Ruritan Club. He had served as the Secretary Treasurer for the Virginia Circuit Court Clerks Association for 13 years and was on the Board of Directors for the Bank of Southside Virginia. Mr. Figg was a member of Gregory Memorial Presbyterian Church where he was ordained as a Ruling Elder. He will be remembered by his family as a loving and devoted husband, father, grandfather, great-grandfather, uncle and friend. If there was ever a definition of a true southern gentleman, it would be Kenneth Figg. He is survived by his loving wife of 70 years, Ruth Burrow Figg; three daughters, Susan Figg Partin, Betty Figg Johnson (John) and Barbara Gayle Figg; grandsons, Bolling Partin, III, Christopher Johnson (Tanisha) and Stephen Partin; one granddaughter, Jennifer Johnson; and four great-grandchildren, Bolling “Stone” IV and Calla Partin, and Aiden and Ava Johnson. The family would like to give a special thanks to Crater Community Hospice for their dedicated service and to the many special friends that provided help and care. A funeral service will be held at 3:00 p.m. on Sunday, May 16, 2021 at Gregory Memorial Presbyterian Church, with the Reverends Jason Cashing and Gibby Elder, officiating. Interment will be private. The family will receive friends from 1:30 p.m. until 3:00 p.m. the day of the service at the church. In lieu of flowers, contributions may be made to Crater Community Hospice, 3916 S. Crater Rd., Petersburg, VA 23805 in memory for Kenneth L. Figg, Jr. The family is being served by the Hopewell Chapel of J.T. Morriss & Son Funeral Home and condolences may be registered at www.jtmorriss.com.

The family of Kenneth Leslie Figg Jr created this Life Tributes page to make it easy to share your memories.

Send flowers to the Figg family.