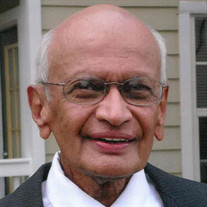 Dr. Kalale S. Krishnamurthy, 84, of Chester, Virginia, passed away peacefully on Sunday, July 25, 2021, after a brief illness. Born in Mysore, Karnataka in India, he grew up in Mysore and Bangalore. He graduated with honors from the University of Mysore with a bachelor of science degree in physics, chemistry and mathematics, and earned his medical degree from Bangalore Medical College (1961), marking the beginning of a nearly 50-year medical career on three continents, starting as a medical officer in Bangalore hospitals. With a suitcase and seven dollars, “Kitty” first came to the United States in 1964 for his medical internships in Chicago, Illinois, and Staten Island, New York. He then initiated his medical residency in England, including in Worcestershire, London and the Channel Islands (United Kingdom), obtaining his membership in the Royal College of Physicians (MRCP) before moving to the United States permanently in 1972. He completed his residency in Bergen County, New Jersey, and practiced in Streator, Illinois, before moving to Petersburg, Virginia in 1978. Known fondly as Dr. Krishna, he cared for patients in the Tri-Cities with compassion in his private internal medical practice for more than 20 years, including serving as medical chief of staff at Southside Regional Medical Center, before retiring due to cancer in 1999. Several years later, he returned to medicine to provide physical exams for incoming service members at Fort Lee’s United States Military Entrance Processing Command (MEPS) in Virginia, which he considered a fulfilling way to give back to the country and community that had provided opportunities for him, his children and grandchildren. Dad, or ThaTha as he was affectionately called by his grandchildren, enjoyed watching them participate in their activities including golf, swimming, soccer, music and dance. He was an avid fan of The Beatles and counted as a highlight taking to the microphone at the Cavern Club in Liverpool during one of his many trips to England. He prided himself on always being up to date on the latest technology, from his first household radio in India to an early adopter of the first home computers and smartphones. Among his proudest moments was becoming a U.S. citizen in 1980, thanks to the sponsorship of his close friend Tommy Lee of Petersburg, Virginia. He is survived by his sons, Kiran Krishnamurthy (Samantha Wilhelm) and Vikram Krishnamurthy (Kathleen Bailey) and daughter, Angela K. Morriss (Tolleison Morriss); his grandchildren, Miles Krishnamurthy, Kenley Morriss, Kira Krishnamurthy, J.T. Morriss VII, Arun Krishnamurthy and Bailey Krishnamurthy; sisters Kamala Krishnappa and Susheela Narayan and brother K.S. Gopinath; many cousins, nieces and nephews and their families. He was preceded in death by his father, Kalale Ramanna Suryanarayanarao, and mother, Subbalakshmi Rama Jois; brothers K.S. Chayamurthy and K.S. Subbaramu; and sisters Venkatalakshamma Shivaswamy, Nagalakshmi Govindiaha and Seethalakshmi Seetharamaiha. The family extends their deep gratitude to his doctors, nurses and staff, as well as to his former colleagues. Visitation will be held on Sunday, August 15, 2021 from 2:00 p.m. to 4:00 p.m. at J.T. Morriss & Son Funeral Home, Chester Chapel, 3050 West Hundred Road, Chester, VA 23831. In lieu of flowers, memorial contributions may be made to the American Cancer Society. Condolences may be registered at www.jtmorriss.com.

Dr. Kalale S. Krishnamurthy, 84, of Chester, Virginia, passed away peacefully on Sunday, July 25, 2021, after a brief illness. Born in Mysore, Karnataka in India, he grew up in Mysore and Bangalore. He graduated with honors from the University... View Obituary & Service Information

The family of Dr. Kalale S. Krishnamurthy created this Life Tributes page to make it easy to share your memories.

Send flowers to the Krishnamurthy family.