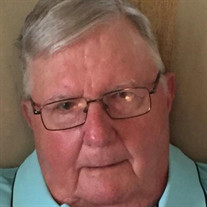 Jules Valerin Harvanek (Jake), loving husband, father, and grandfather passed away peacefully Friday, May 28, 2021 following a long illness. He was at home surrounded by his family. Jake, age 87, was born in Sussex County, Virginia to the late... View Obituary & Service Information

The family of Jules "Jake" Valerin Harvanek created this Life Tributes page to make it easy to share your memories.

Send flowers to the Harvanek family.