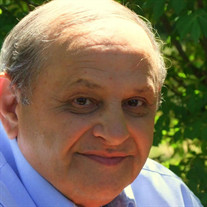 The steps of a good man are ordered by the LORD, and he delights in his way. Psalm 37:23 Joseph Wayne Elmore, 81, of Sutherland, Virginia, celebrated his first day in heaven with his Savior and an untold number of friends and family on Wednesday, March 3, 2021. He was the son of Claude Harris and Ruth Lufsey Elmore. Joe was born August 6, 1939 and raised by George Henry (Goat) and Clara Lamb. Goat was a mentor to Joe through his life. At a very young age, he learned to cut meat while standing on a step stool in his father’s butcher shop. Those skills gained at an early age led to a career as a butcher and meat manager at Pantry Pride and The Sun Store in Petersburg. Taking his expertise to another level, he became a meat merchandiser for A&P Grocery Stores. He especially enjoyed traveling and meeting new people in this job. The last ten years of his career were spent managing the Sam’s Store in Colonial Heights where he was fondly called “Coach Joe.” His dream of creating a family came true when he met and wed the love of his life Voncille Elmore from Pitkin, Louisiana. Together, they created a family that he cherished and would brag about to anyone willing to listen. He was preceded in death by four brothers, Sonny Lufsey (Christine), Claude Elmore, Raymond Elmore (Gloria) and Gary Elmore (Pat); and a sister, Annette Bridgeman. He is survived by his wife, Voncille Elmore; brother, George Elmore; sister-in-law, Mary V. Hensley; four children, Joe Elmore (Cindy), Mary Ann Bleistein (Mike), Mike Elmore (Kim), Shelley Horner (Johnny); 10 grandchildren, Annamarie Compton, Joe Elmore (Brittany), Joel Elmore (Elizabeth), Matt Elmore (Breeann), Jacob Elmore, Ashley Horner, Kaitlyn Horner, Josiah Elmore (Meghan), Michaela Bleistein and Kevin Horner; four great-grandchildren, Roland Wagner, Lila Elmore, Riley Elmore and Rory Compton; and multiple nieces and nephews. The family would like to give a special thanks to Mark and Ben Hensley for their care. A funeral service will be held at 10:00 a.m. on Saturday, March 20, 2021 at the Petersburg Chapel of J.T. Morriss & Son Funeral Home with the Rev. Joe Elmore and the Rev. Jason Elmore, officiating. Grandchildren will serve as pallbearers. Interment will be in Southlawn Memorial Park, Petersburg. Condolences maybe registered at www.jtmorriss.com

The steps of a good man are ordered by the LORD, and he delights in his way. Psalm 37:23 Joseph Wayne Elmore, 81, of Sutherland, Virginia, celebrated his first day in heaven with his Savior and an untold number of friends and family on Wednesday,... View Obituary & Service Information

The family of Joseph Wayne Elmore created this Life Tributes page to make it easy to share your memories.

The steps of a good man are ordered by the LORD, and he delights...

Send flowers to the Elmore family.