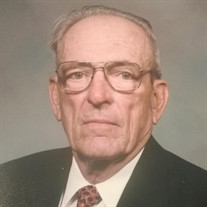 THURSTON, John W. Jr., 96, died on November 11, 2021, at his home in South Chesterfield, VA after a short illness. Johnny was born in Richmond, attended St. Andrews School and John Marshall High School. He was a proud veteran that served in the Navy during WWII in the Pacific theater and again during the Korean conflict. He cherished his career with VEPCO and Dominion Resources rising through the ranks for 40 years in Richmond, Fairfax, and Petersburg and retiring in 1986. He was committed to his family and demonstrating service to the community through his long service in Ruritans, American Legion, and developing programs for children including sports fields, scouting, swim clubs, and advocating for water safety and an early leader for teaching CPR to the public. For years he was the long-term stew master for the Brunswick stew fund raisers for several organizations. He enjoyed family gatherings, church, hunting, bowling, music and dancing and grooming his vegetable gardens over most of his life. He loved the overflowing harvests, canning, winning county fair ribbons, growing the largest vegetables and supplying friends and family with produce. He is predeceased by his parents, John Sr. and Myrtle Duvall, originally from Goochland, and sister, Vernelle Claytor Younginger of Cincinnati and Gulf Shores Alabama. He is survived by his wife, Marian; his children, Christina T. Whiteside (Phil) of Warrenton, John “Jerry” (Mary) of North Chesterfield, Barbara T. Pittman of Dinwiddie, Donald Keith of Falls Church, and Arthur (Dorie) of Chesterfield; and grandchildren, Ginger Higginbotham (Forrest) of Fairfax, VA Denice Herrman (Frank) of Madison, VA, Matt Eidson (Lisa) of Walnut Creek, CA, Will Whiteside of Richmond, Mark Thurston (Rene) of Midlothian, Anthony Thurston (Gail) of Hollywood, CA, Bryan Pittman of Dinwiddie, Brent Thurston (Kim), Melissa Wren (David), and Ellie Thurston of Chesterfield; as well as 17 great-grandchildren and 2 great-great-grandchildren; 2 nephews, Gary (Diane) and Steve (Liz) Claytor (of Cincinnati) and their families. He is also survived by Marian’s 5 children and 8 grand and 10 great-grandchildren. A visitation will be held on Sunday, November 21, 2021 at 12:30 p.m., with the funeral at 2:00 p.m., followed by a reception at J.T. Morriss & Son Funeral Home, Chester, VA. The interment will be private. In lieu of flowers, donations are welcomed to Woods Methodist Church, 7200 Hickory Road, South Chesterfield, VA 23803 or the Alzheimer’s Association in his name. Condolence may be registered at www.jtmorriss.com.

THURSTON, John W. Jr., 96, died on November 11, 2021, at his home in South Chesterfield, VA after a short illness. Johnny was born in Richmond, attended St. Andrews School and John Marshall High School. He was a proud veteran that served in... View Obituary & Service Information

The family of John William Thurston Jr. created this Life Tributes page to make it easy to share your memories.

Send flowers to the Thurston family.