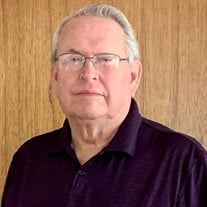 John Bernard Richards, 74, of Dinwiddie, Virginia, passed away on August 23, 2021 after a brief and unexpected illness at SRMC in Petersburg, VA. John was born in Stonewood, West Virginia to the late Mildred K. and Joseph V. Richards. He was the 6th of 13 children. After graduating from Roosevelt Wilson High School, he was drafted to the US Army (‘66) and served a tour of duty in Vietnam (’67-’68). He then relocated to Petersburg, Virginia and worked for Sears for many years, and he retired from Honeywell after 30 years of service. John had a big heart and always tried to help people whenever he could. He never met a stranger and made friends wherever he went. He had a love of music. Singing, playing his guitar and writing songs brought him joy. He was a loving husband to Janice, and father to his daughters, Kimberly and Christina, his granddaughters, Marissa and Emily, and great-granddaughter, Aubree. He was a loving brother, uncle, brother-in-law, and friend to many. He is preceded in death by his parents, Mildred K. and Joseph V. Richards; stepmom, Ramona; his brother, Paul; stepbrothers, Gary and Ronald Dotson; sisters-in-law, Marty Richards and Gail Richards; and brother-in-law Bob Lees. John is survived by his wife Janice (53 years); his daughters, Kimberly Richards and Christina Boyd; his granddaughters, Marissa and Emily; great-granddaughter, Aubree; his brothers, Virgil (Karen), Junior, Roger, Terry, LeRoy (Marcia), Steve (Debbie), Mike (Jeanne); his sisters, Virginia (Ellen) Cutlip, Doloris (Paul) Christy, Linda Lees, Cathy (Jr.) DeHart; sister-in-law, Yolanda Richards; and many nieces, nephews, and cousins. The family will receive friends at J.T. Morriss & Son Funeral Home – Dinwiddie Chapel, 6616 Boydton Plank Road, on Sunday, August 29, from 5:00 PM – 6:00 PM, where a funeral service will take place in the chapel at 6:00 PM. In lieu of flowers, we ask that you donate to the Wounded Warrior Fund in his honor; it was a charity that he always supported. Condolences may be registered at www.jtmorriss.com.

John Bernard Richards, 74, of Dinwiddie, Virginia, passed away on August 23, 2021 after a brief and unexpected illness at SRMC in Petersburg, VA. John was born in Stonewood, West Virginia to the late Mildred K. and Joseph V. Richards. He was... View Obituary & Service Information

The family of John Bernard Richards created this Life Tributes page to make it easy to share your memories.

Send flowers to the Richards family.