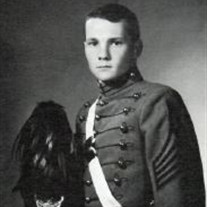 John was born in Hopewell, Virginia, December 8, 1948 and died on February 16, 2022 at St. Mary's Hospital, Henrico County. The son of the late John Nicholas McCutchan and Thelma Conway McCutchan, John was raised in Historic City Point. He was educated in the Hopewell Public Schools and at Augusta Military Academy in Fort Defiance, Virginia, as his father before him. At the Academy, he achieved the rank of First Captain, Battalion Commander, the highest-ranking officer, his senior year. He was selected for the Military Excellence Award for his military abilities, leadership and guiding the Corps, and was inducted into the Ad Astra Per Aspera Society, the highest honor bestowed on a cadet for academic excellence and integrity. Upon graduation, he attended the University of Richmond and John Tyler Community College. John entered active-duty service in the United States Army, serving his country in Korea and Fort Lee, Virginia as a Military Policeman from June 4, 1971 to June 10, 1974. He was awarded the National Defense Service Medal, the Armed Forces Expeditionary Medal and the Army Commendation Medal. Following his military service, John joined the family business, McCutchan Oil Company, Petersburg, and later became co-owner. He worked in the industry for 25 years before leaving to accept employment with the Federal Government, Defense Logistics Agency, Aviation, Richmond, Virginia. He was a Customer Account Specialist for the C-130 Platform, Air Force Mobility Team. He also fielded all customer requests from the C-130 warfighters and ensured they were answered or escalated for resolution. John was actively employed until his death. John was an avid outdoorsman, enjoying the sport of hunting and fishing and spending time in the great outdoors at the family farm, Arleigh, in Prince George County. He was a member of the American Legion Hopewell Memorial Post 146 and the Legion Riders and the Veterans of Foreign War, Post 637, Hopewell. One of his greatest attributes was his unwavering love for his family and friends and his country. He is survived by his wife of 50 years, Paula Elaine Owens McCutchan; his son, John Nicholas McCutchan III and his wife, Cheyenne, of Richmond; his daughter, Katherine Conway McCutchan Croft and husband, Cary, of Chester; his five grandchildren, Nicholas Buchanan McCutchan and his wife, Alyssa, of North Prince George; Paul Zane Carter Croft, John Bryce McCutchan Croft, Arleigh Helene McCutchan and Adalyn Pearl McCutchan; and a great-granddaughter, Presley Hope McCutchan; his sisters, Jane Moore Eliades, of Chester, Martha Randolph McCutchan Faison and her husband, James, Rachel McCutchan Childs and her husband, Stanley, and Elizabeth McCutchan Amick, of North Prince George; two sisters-in-law, Antonia Nomikos and husband, Spyros, of Ontario, Canada, and Carol Ruth Owens and husband, Charley Grissam, of Midland, Texas; a brother-in-law, Thomas Charles Owens and wife, Alice, of Prince George; and many nieces and nephews. In addition to his parents, John was preceded in death by his two sisters and their husbands, Lillian Moore Holden and her husband, Bob, and Nancy Moore Lanik and her husband, Tom. A funeral service will be held at Merchants Hope Episcopal Church, Prince George County, on Tuesday, February 22, 2022 at 11 a.m. Interment will follow the service at Merchants Hope Memorial Gardens. A repast will be held at the Parrish Hall, adjacent to the church, immediately following interment. The family is being served by the Hopewell Chapel of J.T. Morriss & Son Funeral Home. Flowers are welcome or donations may be made to a charity of your choice in memory of John. Condolences may be registered at www.jtmorriss.com.

John was born in Hopewell, Virginia, December 8, 1948 and died on February 16, 2022 at St. Mary's Hospital, Henrico County. The son of the late John Nicholas McCutchan and Thelma Conway McCutchan, John was raised in Historic City Point. He was... View Obituary & Service Information

The family of John N McCutchan, Jr. created this Life Tributes page to make it easy to share your memories.

Send flowers to the McCutchan family.