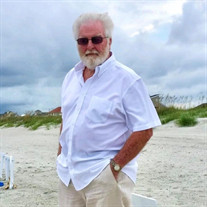 Jerome Howard Weedon, Sr., 82, of Chesterfield, VA, went to be with his Lord and Savior on September 10, 2021. He was born and raised at Hobson Farm in Weedonville, King George, VA. He was the son of the late James Buchannon and Kate Howard Weedon. He was a loving, caring husband, father, grandfather, great-grandfather and animal lover. From the time he was a toddler, using the metal bedposts as a steering wheel, he knew his destiny involved driving. He drove 18 wheelers for long distance driving until he retired at age 55. He then returned to drive tour buses until age 75. He began his driving career hauling logs in King George. He then moved to Richmond taking a job with Yellow Freight followed by a move to Charlotte, NC to drive for Johnson Motor Lines until the company went out of business. Thereafter, he drove for James River and ended his career with Liquid Carbonic in Hopewell. His tour bus driving began with Tourtime, Martz, and Groom Transportation. He especially loved driving for the Richmond Kickers soccer team. He was most proud that he maintained a perfectly safe driving record throughout his career. He was a hard worker, spending many hours on the road to take care of his family. He had a great love for all animals. He was a pet owner many times over and loved Chihuahuas. You seldom saw him without his “Peanut” in his arms. He was known for his sense of style and meticulous appearance. You could expect to be entertained during conversation as he was the king of one-liners and you could always enjoy a hearty laugh. He believed you get out of life what you work for. He never met a stranger, and he loved socializing with everyone he encountered. He was always willing to help anyone in need. He will be missed by so many. In addition to his parents, Mr. Weedon was preceded in death by his loving/devoted wife of 63 years, Barbara Jean Coghill Weedon, five brothers and one sister. He is survived by three children, Gail, Jerome, Jr. (Alice) and Dwayne Weedon, all of Chesterfield, VA; six grandchildren, Joshua (Cydni), Heather, Katelyn (Richard), Austyn, Chandler, and Skylar; six great-grandchildren; a sister, Eva Weedon Honeycutt, of Birmingham, AL; as well as several nieces and nephews. Lastly, not to forget his faithful sidekick/companion of ten years, his Peanut!! The family will receive friends on Friday, September 17, from 6:00 pm to 8:00 pm at the Chester Chapel of J.T. Morriss & Son Funeral Home. A funeral service will be held Saturday, September 18 at 10:00 a.m. at the funeral home. In lieu of flowers, donations may be made to SPCA or charity of your choice. Condolences may be registered online at www.jtmorriss.com.

Jerome Howard Weedon, Sr., 82, of Chesterfield, VA, went to be with his Lord and Savior on September 10, 2021. He was born and raised at Hobson Farm in Weedonville, King George, VA. He was the son of the late James Buchannon and Kate Howard... View Obituary & Service Information

The family of Jerome Howard Weedon, Sr created this Life Tributes page to make it easy to share your memories.