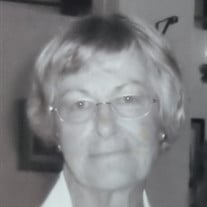 Jean A. Harrison, of Prince George, Virginia, passed peacefully to her eternal rest on March 22, 2022. She was predeceased by her husband of 59 years, Henry H. Harrison III. Jean and Henry were best friends. They were born on the same day, played together as young children, went through Prince George High School together, and married while in college. Jean received an associate degree from Averett College and continued her education at James Madison University. Once married, Jean left JMU to help support the couple until Henry completed his degree from Randolph Macon. After college, Jean and Henry built their home on the Harrison farm in Prince George County. They raised two children along with an untold number of Angus beef cattle. Jean loved being outdoors, gardening, hunting, raising cattle, and was always curious about the natural world. She entered farming at a time when women were not always accepted in this perceived man's role, but that did not stop Jean. She attended classes to help build a high-quality herd, received a certificate for artificial insemination, sold seed to local farmers, worked on the farm, and raised her two children. Along with all that, she made an incredible apple pie. Jean was proud of her Czechoslovakian heritage and respected the life and struggles of the generations that came before her. She was a charter member and devoted volunteer at the Prince George County Regional Heritage Center and especially enjoyed the Czech-Slovak festival. She helped serve lunch to the many visitors that attended the festival and always made dozens of poppyseed kolaches. Along with her husband, Jean is preceded in death by her parents, Harold and Bessie Allin; her sister, Hazel Swann; and her brother, Earl Allin. She is survived by her daughter, Kimberly Harrison; Kimberly's husband, Heath Locke; son, Henry Hinton Harrison IV and wife, Lynn; grandson, Henry H. Harrison V (Hank); and her sister, Nellie Allin Dempsey and husband, James Dempsey. In accordance with Jean's wishes, memorial services will be private. Anyone wishing to honor Jean may donate to Crater Community Hospice, www.cratercommunityhospice.org. J.T. Morriss & Son Hopewell Chapel is assisting the family. Condolences can be registered online at www.jtmorriss.com.

Jean A. Harrison, of Prince George, Virginia, passed peacefully to her eternal rest on March 22, 2022. She was predeceased by her husband of 59 years, Henry H. Harrison III. Jean and Henry were best friends. They were born on the same day, played... View Obituary & Service Information

The family of Jean Allin Harrison created this Life Tributes page to make it easy to share your memories.

Send flowers to the Harrison family.