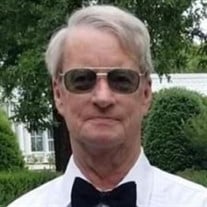 James “Jim” Henry Bickerstaff III, 65, of Richmond, passed away on Saturday, May 29, 2021. He was preceded in death by his parents, James Henry Bickerstaff Jr. and Pauline Bloxton Bickerstaff; and his sister, Brenda Bickerstaff. Jim was an over the road trucker for over 20 years before retiring. He was a friendly and outgoing neighborhood guy. You didn’t have to be his neighbor to know the pleasure of Jim’s company. Each cherished friendship he had was unique and irreplaceable. He also had a love for all animals, especially his two cats. He will be greatly missed by his family and friends. If you knew Jim, you knew about his sons. He always talked about his two boys. Jim is survived by his two sons, James Marshall Bickerstaff (Rachel Coley), of Austin, TX and Brian Joseph Bickerstaff (Laura Zicarelli), of Richmond, VA; sister, Janet Bickerstaff Dykes (Hank Dykes), of Quinton, VA; brothers, John Wayne Bickerstaff (Janit Jones), of Henrico, VA and Kenneth Michael Bickerstaff (Shirley Gatto Fraer), of Henrico, VA; numerous nieces, nephews, and cousins; the mother of his sons, Tery “Mother Theresa” Bickerstaff; and beloved cats, Velvet and Willie. The family will receive friends on Friday, June 4 from 6-8 PM at the Chester location of J.T. Morriss & Son Funeral Home, 3050 W. Hundred Road, Chester, VA 23831. A Mass of Christian Burial will be held on Saturday, June 5 at 11 AM at St. Benedict Catholic Church, 300 N. Sheppard Street, Richmond, VA 23221. Interment will directly follow the service at Mt. Calvary Cemetery, 1400 S. Randolph Street, Richmond, VA 23220. In lieu of flowers, memorial contributions may be made to the Richmond Animal League (RAL). Condolences may be registered to the family at www.jtmorriss.com. “AWE, HELLFIRE!”

James &#8220;Jim&#8221; Henry Bickerstaff III, 65, of Richmond, passed away on Saturday, May 29, 2021. He was preceded in death by his parents, James Henry Bickerstaff Jr. and Pauline Bloxton Bickerstaff; and his sister, Brenda Bickerstaff.... View Obituary & Service Information

The family of James Henry Bickerstaff III created this Life Tributes page to make it easy to share your memories.

Send flowers to the Bickerstaff family.