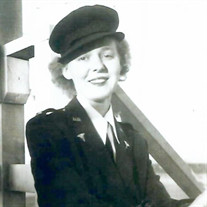 Ilene E. Dougherty, 101, a bona fide member of The Greatest Generation and long-time resident of Petersburg, died Thursday, July 8. Formerly of Keysville, VA, Ilene was predeceased by her parents, James Austin and Joanna Weaver Lefevers; her husband, COL William 0. Dougherty, Jr.; her son, William 0. Dougherty III; a brother, James A. Lefevers; and sisters, Helen L. Lafon and Betty Eubanks. She leaves to cherish her memory her daughter-in-law Ellen, Aurora, CO, and a special nephew Jimmy Lefevers (Mariea) of Keysville. Her devoted and long-time friends, Ann Burgess, Florence Dunn, Trudy Donati, and Antrynet Elston, will miss Ilene's story-telling of her World War II adventures, her feistiness, her patriotism and her determination to live independently and manage her affairs. Born in Newton, NC, May 19, 1920, Ilene graduated from high school at age 16. Too young to attend nurses training--one had to be 18-she worked in a local hospital in Lincolnton, NC, until a doctor recognized her extraordinary abilities and wrote on her behalf to the training hospital to see if she could attend at age 17. She was accepted and trained at Mary Black Memorial Hospital, Spartanburg, SC. After graduating in May 1940, she worked at Hickory Memorial Hospital, Hickory, NC, until she received a letter from the US government asking nurses to volunteer for Army service. Ilene answered the call for this desperate need for nurses during the war and volunteered to help her country. On Nov. 1, 1942, she took the oath of office and trained at Camp Swift, TX. In February 1, 1943, she joined 48 other nurses in training at Camp Kilmer, NJ, prior to joining the n" Evacuation Hospital in Rabat, North Africa, which followed General Patton's fighting troops 1,400 miles across the Atlas Mountains to Oran, Algeria and Tunis. Campaigns in Tunisia, Sicily, Naples-Foggia, Rome-Amo, Anzio, Southern France, Rhineland and Central Europe followed. According to Ilene, General Patton had said no women would be in his vicinity; however, he discovered he had to have nurses to run the hospital. The 11th Evac Hospital replaced the 95th Evac Hospital that had been bombed on the Anzio Beachhead. Ilene recalls the first night of fighting between the Americans in Anzio and the Germans in Cassino. She had more than 100 patients on her 40-bed orthopedic ward. When visiting the orthopedic ward, Patton called Lefevers "LT Blonde." After the breakthrough to Cassino, it was on to Rome. While there, the Pope asked for an audience with some of the nurses to thank them for their work. Ilene was one of the nurses to meet the Pope. After Rome, they made the D-Day landing in Southern France. Ilene vividly recalled her service with the Army Nurse Corps as though it happened yesterday. Serving with a health unit on inspection, she witnessed the horrors of the Dachau Concentration Camp, forever stamped in her memory. In October 1945, she returned to the States and wed Bill Dougherty, a dentist also with the 11 Evac Hospital, with whom she served during the 31 months she was overseas. An immensely private person, Ilene was reluctant to tell her story to anyone other than those who were in her inner circle. Following the death of her husband in 1966, Petersburg became Ilene's home a year later. She attended St. Mark's United Methodist Church, where her son, Bill, III, was its first Eagle Scout. A special thanks and salute to all the health care workers on the John Tyler Wing, Colonial Heights Health Care and Rehabilitation Center, who cared for Ilene since 2017 and to Mary Lou Earhart, Activities Director, and the individuals who made Ilene's 101st birthday celebration such a special occasion. A funeral service, conducted by Rev. Jerry Wicker, will be held at 11 AM on Saturday, July 17 at the Petersburg Chapel, J.T. Morriss Funeral Home, 103 S. Adams Street. Burial will be at a later date in Arlington National Cemetery. In lieu of flowers, memorial contributions may be made to Friends of the Army Women’s Museum Association, P.O. Box 1027, Prince George, VA 23875. Condolences may be conveyed at www.jtmorriss.com.

The family of Ilene Elizabeth Dougherty created this Life Tributes page to make it easy to share your memories.

Send flowers to the Dougherty family.