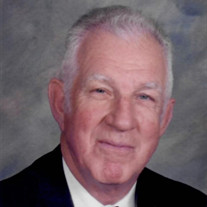 On April 13, 2022, Horace Iverson Boswell, from Chesterfield County, departed from this earth; he was welcomed to his eternal home with God. At 93 years old, he left behind a legacy that will never be forgotten. He pioneered the Southern Section in the Potomac District Royal Rangers, during which his most important mission was reaching, teaching and keeping boys for Christ. He lived out his life for Jesus by being a compassionate neighbor, loyal friend, and brother in Christ for so many people. Horace was an avid gardener and builder. There was nothing he could not grow or fix, from plants to people. Horace served his country in the Army, stationed in Germany after WWII. Horace was the walking definition of God, Family and Country. He was simple yet efficient. He will be dearly missed by many. Horace has now joined his family that has gone before him, his wife of 58 years, Audrey O'Berry Boswell; parents, Henry and Edna Boswell; brothers, Edward Boswell and Boyd Boswell; sister, Elizabeth Nelson and a baby sister. He also leaves behind the family that he built, daughter, Gwen Ellen Davis and Tom; granddaughter, Sarah E. Davis and Adam; great-grandchildren, Brooke, Autumn, Emma, and Lilly; grandson, Joshua H Davis; son, Paul Boswell and Mary; granddaughter, Ann Boswell and Richard; great-grandchildren, Horace(Trey), Tabetha and Benjamin; grandson, John Boswell and Rebecca; great-grandchildren, Aria and baby; grandson, Mathew Boswell and Blythe; granddaughter, Samantha Boswell and Anthony; great-grandchildren, Ana, Lane, Luke, and Joseph; and daughter, Janet Boswell. He also leaves behind a brother, Johnny Boswell, Joyce, and family; and sister, Grace Dunford, Ronnie, and family. The family invites visitors to Horace's home on Friday April 22, 2022 from 4:00 PM to 8:00 PM. Viewing will take place at 11:00 AM on Saturday April 23, 2022 at First Assembly of God in North Dinwiddie. Funeral service will follow at 12:00 PM, with Pastor Dwayne Walker officiating. Interment will be at Southlawn Memorial Park at the conclusion of the service. In lieu of flowers, please donate to First Assembly of God at 25213 Ferndale Rd, North Dinwiddie, VA 23803. Condolences may be registered at www.jtmorriss.com.

On April 13, 2022, Horace Iverson Boswell, from Chesterfield County, departed from this earth; he was welcomed to his eternal home with God. At 93 years old, he left behind a legacy that will never be forgotten. He pioneered the Southern Section... View Obituary & Service Information

The family of Horace Iverson Boswell created this Life Tributes page to make it easy to share your memories.

Send flowers to the Boswell family.