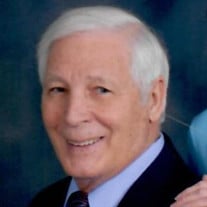 Homer Gray Garr, Sr., 89, of Prince George VA, died January 16, 2022. Born September 11, 1932 in Culpeper, VA he was the son of the late John Henry and Mary May Garr. He was a loving husband, father, grandfather, great grandfather and coach to many. After graduating high school, he served in the United States Army during the Korean War while concurrently playing in the All Europe Baseball League. He received a BA in Education from Fairmont State University in 1957, and a Master of Education from Middle Tennessee State in 1969. He was a career educator and mentor to many students and athletes. He coached basketball at both the high school and collegiate levels, most notably Manchester High School and Vanderbilt University. After his coaching career, he served as an administrator in several Chesterfield County Schools. He retired as an administrator from Matoaca High School in 1998. Coaching was his passion both professionally and in retirement. His influence on his players reached well beyond the court and playing field. He was a member of Sycamore United Methodist Church in Prince George, VA He was preceded in death by his parents; three sisters, Betty, Jean and Erma; three brothers, John, Herbert and Ray. He is survived by his beloved wife of 33 years, Sandra Barnes Garr; children, Terry Potter (Joe), Donna Chalkley, Susan Troster (Michael), Homer Garr Jr., (Cindy); stepsons, Joe Wells (Aly), Cary Wells (Ashley). He had 17 grandchildren; Ben, Kate, Betsy, Eric, Dustin, Amanda, Rebecca, Mary Anna, Cody, Bethany, Madison, Jack, Henry, Austin, Tyler, Macon and Maggie Dean; numerous great grandchildren; brother, Jesse Garr; nieces and nephews. A celebration of life ceremony will be held at 1:00 p.m. on Friday, February 18, 2022 at the Petersburg Chapel of J.T. Morriss & Son Funeral Home. The family will receive friends following the service. Entombment of cremated remains will be held at Arlington National Cemetery at a later date. In lieu of flowers, donations can be made to Leukemia and Lymphoma Society, P.O. Box 22324 New York, NY 10087 or to Multiple Sclerosis Foundation, 6520 N. Andrews Ave, Fort Lauderdale, FL 33309. Condolences may be registered at www.jtmorriss.com

Homer Gray Garr, Sr., 89, of Prince George VA, died January 16, 2022. Born September 11, 1932 in Culpeper, VA he was the son of the late John Henry and Mary May Garr. He was a loving husband, father, grandfather, great grandfather and coach... View Obituary & Service Information

The family of Homer Gray Garr, Sr. created this Life Tributes page to make it easy to share your memories.

Send flowers to the Garr, family.