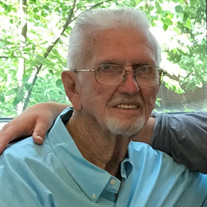 Harvey Clinton Spain, 82, of Prince George County, VA, passed away on June 11, 2022. He was born in Hopewell, but was raised and resided in Prince George County all of his life. He is the late son of Raymond Albert and Pearl F. Spain. He was a '57 graduate of Prince George High School and attended Smithdeal-Massey Business College. Harvey was employed for over 40 years at Hercules Inc. in Hopewell. In his early years, he was a member of Rosewood Presbyterian Church and later served at Oakland Baptist Church, and finally at The Heights Baptist Church in Colonial Heights. He spent some of his retirement years serving with the Colonial Heights Food Bank, Prince George Crime Solvers, Superkids program, and the Prince George Emergency Crew Executive Board. He had a love of saltwater fishing and spent many retired days with his buddies fishing in the Outer Banks or out in the Chesapeake Bay. His true passion in life was the love he showed for his family, and we shall never forget his unwavering support and generosity. There is no doubt that in his heart he truly loved and served our Lord and Savior. He is preceded in death by his loving wife of 36 years, Evelyn Spain. He is survived by his brother, Kenny Spain (Freddie) of Prince George; uncle, Ralph Forloines of Prince George; son, Keith A. Spain (Ruby) of Prince George; daughter, Kimberly S. Garcia of Richmond, son, Michael E. Andrews (Brandy) of Georgia; grandchildren, Sidney Mayer (Cory) of Henrico, Travis Spain (Courtney) of Charlottesville, Jacob Spain (Kait) of Dinwiddie, Willow Maeurer and Sophia Andrews; great-grandchildren, Ellie Mayer and Fynn Spain. The family will receive friends Tuesday, June 14, 2022 at J.T. Morriss & Son Hopewell Chapel from 5:30 p.m. - 7:00 p.m., followed by a memorial service beginning at 7:00 p.m. officiated by Reverend Mike Osborne. There will be a private interment on Saturday June 18, 2022, at Appomattox Cemetery. In lieu of flowers, memorial donations may be made to Prince George Emergency Crew. Condolences may be registered at www.jtmorriss.com.

Harvey Clinton Spain, 82, of Prince George County, VA, passed away on June 11, 2022. He was born in Hopewell, but was raised and resided in Prince George County all of his life. He is the late son of Raymond Albert and Pearl F. Spain. He was... View Obituary & Service Information

The family of Harvey Clinton Spain created this Life Tributes page to make it easy to share your memories.

Send flowers to the Spain family.