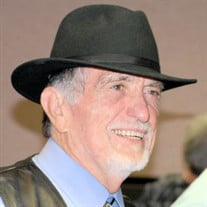 NEWMAN, Harvey Calvin, “Cal,” of Chesterfield, departed this life on November 13, 2021 at the age of 88. He was born in Chesterfield County, Virginia on November 27, 1932, the youngest of two boys, to Noah and Lena Newman. He was preceded in death by the love of his life, his wife of 61 years, Dorothy “Dot” Colbert Newman, on June 8, 2020. He was also predeceased by his brother, Leonard Adolph Newman, and his parents, Noah Smith Newman and Lena O’Berry Moore Newman. He is survived by his nieces, Maxine Newman Newton, Anne Newman Pannill (Jim) and Carla Colbert Temple (Derrick); his nephews, Leonard Adolph Newman, Jr. (Brenda), Thomas Richard Mays, Jr. (Brenda) and Michael Keith Mays, Sr. (Judy); and his sister-in-law, Doris Capps Colbert. He is also survived by his great-nieces, Kimberly Newton Bostain, Shannon Pannill Barnette (Eddie), Danielle Bookman Cummins (Joey), Ashley Dawn Mays Mann (Jonathan); and his great-nephews, Bryant Newton (Michelle), David Braxton Bookman (Ashley), Michael Keith Mays, Jr., Thomas Richard Mays III (Nicole), Daniel Raymond Mays, and numerous great-great-nieces and nephews, including his fiddle protégé, Maggie Bostain. While faithfully serving his country, Cal went on to receive his GED. He served in the Merchant Marine for two years and in the U.S. Army for three. His last year of military service was spent touring and performing as part of a band formed from troops in the special services. He worked at McGuire Television from 1956-1966 and retired from AT&T in 1991 after 25 years of service. Cal Newman was one of the most respected fiddle players and musicians in country music, while also being the humblest. He was a Seven Time Virginia State Fiddle Champion. In the 1950s, he toured with the Osborne Brothers (Sonny and Bobby). In the 1960s and 1970s, he performed as a regular at The Hunter’s Lodge in Fairfax, Virginia, which was host to famous musicians for years. He was inducted into the Virginia Country Music Hall of Fame in 1979. He performed with the Old Dominion Opry in Williamsburg, Virginia from 1991-1997. He was still performing well into his 80s, from 2015-2018, as a member of the “new” Old Dominion Barn Dance. He was the only member to have also performed on the original Old Dominion Barn Dance (1946-1957). His love of his wife, Dot, his love of his numerous nieces and nephews, and his love of playing music was prevalent his entire life. He will be missed by all who knew him. Services will be held 11:00 a.m. Wednesday, November 24, 2021 at J.T. Morriss & Son Funeral Home, Chester Chapel, with the interment following at Sunset Memorial Park, Chester, VA. Condolences may be registered at www.jtmorriss.com.

The family of Harvey C. Newman created this Life Tributes page to make it easy to share your memories.

Send flowers to the Newman family.