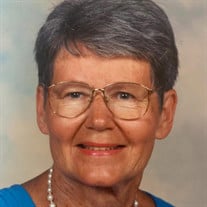 Greta Perkins died peacefully on September 29, 2021 at The Laurels of Bon Air. She was 90 years old. Greta was born on December 10, 1930 in Patterson, NJ. She was a first-generation American of immigrant parents from Eastern Europe. Greta completed nursing training at Hackensack Hospital in New Jersey in 1951 and took her first job at McGuire Veteran’s Hospital in Richmond. While working there, she met her close friend and mentor, Rebecca Perkins, who introduced her to her future husband. Greta married Robert B. Perkins in 1953 and they had four children who they raised in Petersburg, VA. Greta worked as a registered nurse for many years at both Central State Hospital and Petersburg General/Southside Regional Hospital in Petersburg. Robert Perkins passed away in September of 1987. Upon retirement, Greta reconnected with her dear childhood friend, Joan English, and moved briefly to Phoenix, AZ. They shared many travel adventures before moving back to Virginia in 2009. Joan and Greta spent happy last years together at the Lucy Corr Springdale Retirement Facility in Chesterfield before Joan passed away in March of 2019. Greta is survived by her sister, Nancy Degenaars of Macungie, PA; and four children, Susan Rebecca Perkins of Murrieta, CA, Robert Paul Perkins of Chester, VA, Daniel Frederick Perkins of Prince George, VA, and James Edward Perkins of Chesterfield, VA; and six grandchildren. The family wishes to thank the staff at The Laurels of Bon Air for their compassionate care provided to Greta during her last days. Memorial donations in Greta's honour may be directed to Trinity United Methodist Church in Petersburg, VA. Visitation will be open for friends and family on Monday, October 4, 2021 from 1:00 pm to 2:00 pm at the Chester Chapel of J.T. Morriss & Son Funeral Home. A memorial service will follow at 2:00 pm. Interment will be private. Condolences may be registered at www.jtmorriss.com.

Greta Perkins died peacefully on September 29, 2021 at The Laurels of Bon Air. She was 90 years old. Greta was born on December 10, 1930 in Patterson, NJ. She was a first-generation American of immigrant parents from Eastern Europe.... View Obituary & Service Information

The family of Greta Irene Perkins created this Life Tributes page to make it easy to share your memories.

Greta Perkins died peacefully on September 29, 2021 at The Laurels...

Send flowers to the Perkins family.