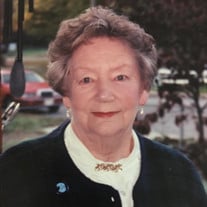 Grace Emily Dowse Howell, 94, of Hopewell, passed away on Tuesday, February 16, 2021. Born in Oxford, England, she was the daughter of the late Henry and Emily Franklin Dowse. She was also preceded in death by her beloved husband, SFC (RET) Roland White Howell; brother, Dennis Dowse and sister, Joan Harris. She is survived by her children, Larry Howell, Graham Howell (Laurie), Billy Howell (Leanne), Lisa Sharpe (Derek), and Emily Braughton (Lance); grandchildren, Elizabeth Martin, Joshua Howell, Jordan Howell, Alison McCullum, Christin Ellis, Rocky Howell, Andrew Roland Howell, Brittany Hilton, Julia Grace Sharpe, Grace Braughton, and Emma Rose Braughton; 13 great-grandchildren; sister, Barbara Gilders (Fred) of Oxford, England; sister-in-law, Helen Cooper of Waterproof, Louisiana; and special caretaker, Stephanie Summers. Grace and Roland were married on Valentine’s Day 1948 in Oxford, England. In 1950, she, Roland and their newborn son Larry left Oxford en route to Chicago. That was the beginning of their adventures: travelling the world together and welcoming four more children into their family. Grace was a devoted army wife and saw her husband off to three wars. They built their house in Hopewell, Virginia in 1953, and after years of being abroad were finally able to call it home in 1964. In 1968 Roland retired from the army and settled into civilian life. Grace and Roland were members of the greatest generation and taught their children the value of hard work. Roland died in 1984 and Grace immersed herself in her family. She was the quintessential grandmother to her grand- and great-grand children. At the age of 59, she studied for and passed her first ever driver’s license exam so that she could travel when and wherever she wanted, and especially to see her grandchildren. She was a faithful member of West Hopewell Presbyterian Church. She loved Jesus and all of her dear friends there. She was also a founding member of the Trans-Atlantic Brides and Parents Association, an organization of war brides dedicated to chartering planes back to England and Europe for its members. At TBPA Grace made dear and life-long friends many of whom she outlived. Grace especially enjoyed baking fresh bread while working in the cafeteria at Woodlawn Elementary School. She had a heart of gold and her kindness extended to every child that went through her lunch line. This kindness truly defined who she was. Her favorite song was “There’ll Be Bluebirds Over the White Cliffs of Dover” by Vera Lynn and she sang it with love and hope. She will be dearly missed by her family and friends. A funeral service will be held at 2:00 p.m. on Tuesday, February 23, 2021 at West Hopewell Presbyterian Church. The family will receive friends one-hour prior from 1:00 p.m. to 2:00 p.m. In lieu of flowers, memorial contributions may be donated to West Hopewell Presbyterian Church Deacon’s Fund, 2600 Wise St. Hopewell, VA 23860. Condolences may be registered at www.jtmorriss.com.

Grace Emily Dowse Howell, 94, of Hopewell, passed away on Tuesday, February 16, 2021. Born in Oxford, England, she was the daughter of the late Henry and Emily Franklin Dowse. She was also preceded in death by her beloved husband, SFC (RET)... View Obituary & Service Information

The family of Grace Emily Dowse Howell created this Life Tributes page to make it easy to share your memories.

Grace Emily Dowse Howell, 94, of Hopewell, passed away on Tuesday,...

Send flowers to the Howell family.