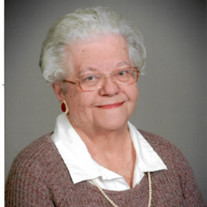 With tear filled eyes and aching hearts we say, "God welcomed another Angel into Heaven". On January 21st, after being surrounded by love from her three children, Gail Frances Fuhrmann Chevalier, 83, of Prince George County, peacefully left us to be with our Lord Jesus. She joins her parents, George and Helen Fuhrmann; brother and sister-in-law, Howard and Anna Fuhrmann; and the love of her life, her husband, Edward Charles Chevalier, Jr., in gaining her wings and rejoicing in God's presence. Gail was born and raised in Trenton, NJ, and attended Englewood Hospital Nursing School earning her nursing degree (RN) in 1959 with honors. She married Edward on September 2, 1961, and they were married for 49 years until his death in 2011. During their marriage, Gail took time off from nursing to raise their three children and then went back to work as an RN at John Randolph Nursing Home as well as working as a Home Health nurse. Gail was a loving wife, mother, and "Grammy", and devoted many hours to her churches, Women's Clubs, and Red Hat Societies. She and Ed enjoyed traveling, cruising, and celebrating Mardi Gras. Gail also enjoyed working her Word Search puzzles, other puzzles in the newspaper, and keeping in touch with her friends from all the places they lived - Potsdam, Baton Rouge, Gulf Shores, and here in Hopewell/Prince George. Gail is survived by her daughters, Lori Chevalier and Julie Chevalier Walton, both of Prince George; her son, John Chevalier and wife Karen of Kountze, Texas; three grandchildren, Joshua Chevalier and his wife, Kaylea of Kountze, Texas, Jonathan Walton of Prince George, Meagan (Chevalier) Burks and her husband, Seth of Warrensburg, Missouri; niece, Beverly Fuhrmann Bohannon and her husband, Jay of Belvidere, NJ; nephew, Bruce Fuhrmann and his wife, Toni of Wall, NJ; and several great and great-great nieces and nephews. The family would like to extend a special thank you to her caretaker, Ms. Tammy, for all the care and friendship she provided during the last two months. And also to the hospice team at St. Mary's Hospital. A funeral service will be conducted at 11:00 a.m. Saturday, February 5, 2022 at the Hopewell Chapel of J.T. Morriss & Son Funeral Home with interment following at Bermuda Memorial Park, Chester. The family will receive friends before the service beginning at 10:00 a.m. Saturday at the funeral home. Condolences may be registered at www.jtmorriss.com.

The family of Gail Fuhrmann Chevalier created this Life Tributes page to make it easy to share your memories.

Send flowers to the Chevalier family.